Not much, to be honest. We are not really an active band in any sense of the word, but we rehearse once in a while and as for now the main focus is promotion of said album.

2.In January you have a new album coming out, musically how does it differ from your previous album and demo?

In many ways it does not differ at all, but if it makes any sense I think that it is more scaled down, at the same time as it more thought through and elaborate. Production-wise the first album probably had a slightly more death metal sound to it, due to the equipment that was available at the time, some of which has since been stolen from us.

3.This is your first release in 6 years, can you tell us a little bit more about what has been going on during that time span?

The writing of new material is probably what has taken the most time, not because we are perfectionists, but because we do not have much spare time due to other occupations. As for the recording we spent two days in an professional studio recording the drums but everything else we recorded in our rehearsal space, which gave us the freedom to record whenever we felt like it. Comfortable, but not ideal for progress. We might play fast, but we work very slowly.

4.You also cover a lot of anti Christian themes lyrically, can you tell us a little bit more about your hatred for this religion?

Well, a lot of them aren't really anti christian as much as they are a celebration of all the horrible acts committed in the name of christianity, that christians are often very eager to deny. Of course, the lyrics are anti human, anti life and pro every change for a worse and darker tomorrow, which by definition also means they are against anything included in the official christian view of the world.

5.What are some of the other lyrical topics and subjects you explore with the music?

As the name would imply perversions of different kinds are central to the lyrics. Speaking for myself it usually starts with reading passages of the gospel and misinterpreting and twisting them in the sickest way imaginable.

6.What is the meaning and inspiration behind the name 'Perveticon'?

It originally stems from something I misread in some context or other, which then seemed fitting. Most artistic expressions benefit from contrast, and the name contrasts itself between the two words it is comprised of.

7.Can you tell us a little bit more about the artwork that is presented on the album cover?

The artwork was made by O.S, our drummer and vocalist, so I can't really say too much about the process behind it. I do however know that depicts a vision of the apocalypse.

If you can even call it a show we have only made one appearance, privately and at the request of some acquaintances. It was well received, but not having a full line-up does pose certain limitations.

No, not likely. We would need at least one more person to do the recorded material justice in a live setting, and we do not really see that happening. It is hard enough to find time for rehearsals and recording with just the three of us.

10.So far you have worked with 'Mordgrimm and 'Iron Bonehead Productions', do you feel these labels have been very helpful when it comes to getting your music out ther heard?

Yes. We are very grateful for their interest and support!

11.on a worldwide level how has the reaction been to your music by fans of black metal?

Well, our research when it comes to international relations is severely lacking, not to say non-existent, but indications are that it has been appreciated.

That is a surprise every time, we have not made any active decision in regards to musical orientation.

Probably pretty much what you would expect after hearing it, a lot of 90's norwegian music such as Mayhem, Darkthrone and Gorgoroth. Also Deathspell Omega, Sorhin, Antaeus, Funeral Mist and Malign. Dissection to some extent, even if that might not be as prominent. As for newer releases there have been a lot of interesting music coming from Poland over the course of the last few years, e.g. Mgla, Kriegsmaschine and Medico Peste.

14.Does Satanism or Occultism play any role in your music?

While both are interesting subjects that have served as the foundation of a multitude of works that have inspired us greatly, there is an aspect of personal growth and development to actively practicing them. Since that is something we usually try to avoid I would not say that it is essential to our music in its own right.

Thank you very much for your interest and time! 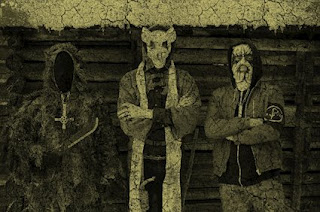 Posted by OccultBlackMetal at 4:01 PM