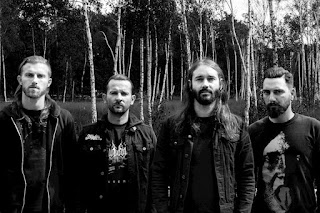 1.Can you give us an update on what has been going on with the band since the recording of the new album?Basically just promoting the new record and as soon as the record is released we will focus on the tour preperations for our upcoming tours through March, April and May.

2.In February you have a new album coming out, musically how does it differ from the stuff you have released in the past?I would say that this record  has a lot of elements of our previous releases to offer combined with the path we took on “Atrophy”. I would definitely say it's “the next step”. Overall it was really important for us to give all of these songs the time they need, to let them grow and unfold but without losing the path of “harsh aggression”. We definitely gave ourselves more time than ever before for this one and that's something you can hear I think.

3.Originally the band started out playing more d beat and crust influenced music but have evolved into more of a atmospheric and black/sludge metal direction over the years, what was the decision behind going into this musical direction?True words. Back in the days the sound was way more into d-beat/crust which already got a lot of emotional ups and downs included in the music, especially the neocrust we were into. In the beginning we were influenced by bands like From Ashes Rise, Ekkaia, Tragedy or Remains Of The Day and I think from that point all of this simply grew naturally and more and more influences found their way into our music. Discovering bands like Neurosis, Wolves In The Throne Room and alikes opened a lot of creative doors. Overall I would say that this was a natural development that took place over the last years.

4.What are some of the lyrical topics and subjects the band explores with the newer music and also how would you describe your progress as songwriters over the years?Basically Ethic Of Radical Finitude is telling a story about discontend minds and the never ending pursuit for more. I guess everyone in life is trying to find this special ‘warm’ and safe place, their special place. To feel ‘home’, to feel ‘safe’, to feel satisfied. But maybe at some point you need to accept that it may never come, that you will never ‘arrive’. The time we have is limited, limited by death. But even if death itself has a bad reputation, it’s the only thing that makes the time you have worthy since without it everything would be forever and absolutely nothing would have any value.Talking the progress as songwriters: I guess nowadays we know way better how to do things to get a satisfying result for all of us. We know way better which path we need to take. I guess this is something all of us learned through all the years.

5.I know that the band name comes from Greek Mythology, can you tell us a little bit more about your interest in this topic?We always have been interested in mythologies, especially the Greek one. In my eyes the most fascinating! Crazy to see what kind of fictional stories had such a big impact to a lot of people.„Gaia“ is the mother of earth and we were on the hunt for a band name that fits to our sound and lyrics. In the end we became Downfall of Gaia.

6.Can you tell us a little bit more about the artwork that is presented on the album cover?For „Ethic Of Radical Finitude“ we wanted to keep the artwork a bit more reduced as on our previous record „Atrophy“. The artwork / cover symbolizes a downward spiral in life, struggling not to get sucked into. Markus Grasseck took care of the artwork.


7.What are some of the best shows that the band has played over the years and also how would you describe your stage performance?That's a tough one. There are so many great memories.  I guess one of the most memorable one was Hellfest in 2014. We never played such a big fest before and to be honest had no idea what to do on such a big stage but the whole festival was an unforgettable experience! Supporting Neurosis was another surreal thing  to do, also all of our shows in Japan were some of the most enjoyable to play.Playing a packed Saint Vitus in New York, also our tour in 2015 together with Der Weg einer Freiheit and getting to know these guys was one of the best things happened. When we are on stage we definitely let the music speak and sink into the moment.

8.Do you have any touring or show plans once the new album is released?
\We will support The Ocean through March, tour with Mantar in April and hit Russia and eastern Europe for a few shows in May. Besides that a few festivals in summer like Wacken or Summer Breeze.\
9.On a worldwide level how has the reaction been to your newer music by
fans of black and sludge metal?\Pretty good i would say. Of course there are always the more „conservative“ ones who aren't that much into our sound but overall we can't complain about a good feedback.   \

10.Where do you see the band heading into musically during the future?\
I don't know. We don't like to set ourselves any limits so it's kinda hard to answer this one right here. We will simply follow whatever feels right. That's what we always did and probably will do. \

11.What are some of the bands or musical styles that have had an influence on your newer music and also what are you listening to nowadays?\Definitely bands like Neurosis and Agalloch. For me personally these two bands had the biggest impact and opened a lot of creative doors!
\
12.Before we wrap up this interview, do you have any final words or thoughts?
Thanks a lot for having us! We will be on the road in upcoming months so hope to see some of you out there at the shows!

Posted by OccultBlackMetal at 9:47 PM