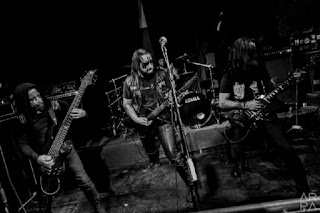 1.For those that have never heard of you before, can you tell us a little bit about the band?
A: Swarm Of hatred has started initially as a solo project during 2011 as the evolution of my former solo project called Impious Bondage, after recruiting some musicians we worked hard to finally release our debut EP in 2014 named “The Brotherhood Of The Black Blood” and during 2018 we released our debut álbum titled “Shrine Of Negativity”, after some changes in the line up due to time availability and musical differences with the former members, right now we are writing our sophomore album with the actual line-up and summarizing to all of this, i can tell you that each release is quite different from each other without losing our main focus and essence.

2.In 2018 you had also released your first full length, can you tell us a little bit more about the musical style you went for on the recording and musically how does it differ from your previous single and ep?
A: Our single was released independent as a promo advance of Shrine Of Negativity, so it opened the doors to sign with Australis Records, one of the biggest recording labels of Chile, and about the musical style and direction that i took is the natural evolve of our sound compared with the primitive structure of our debut EP that took songs that were there since 2009 until 2012, and the Shrine Of Negativity album was written entirely during 2015 and recorded during Winter of 2016 so its the natural follow-up of the direction that was taking our debut EP.

3.Your lyrics also deal with a lot of Luciferian, Gnosis and Occult themes, can you tell us a little bit more about your interest in the dark arts?
A: Well, this interest was born since the starting's of Swarm Of Hatred and with the time was getting pretty deeper and inspiring to write more music as an exaltation of this cult of death and chaos.

4.Originally the band was called  'Impious Bondage' what was the cause of the name change and also the meaning and inspiration behind the name 'Swarm Of Hatred'?
A: When I started Impious Bondage, I was on my late teenager ages (I was 17 when i started Impious Bondage and 20 y/o when I started Swarm Of Hatred), lyrically I was pretty inspired by bands like Belphegor, Marduk and Carpathian Forest, the objective was at that time, doing some BDSM inspired Black Metal, but as the time has passed and i had matured, I realized that the current lyrics were pretty pointless, as I never released any massive material, just a 4 songs homemade demo shared with my closest friends and my classmates in the Institute with a Flash Drive. I decided to change the direction of the Project and thus, the name of it. Oriented initially in a pretty misanthrope mood that perjures until now and is growing up each day doing my daily life, riding the subway, looking at the people with that fluoride gazing who are picking their Smartphone without care of anything but their smartphones and to get into the subway to arrive early to their homes, the actual society inspires me a lot besides the occult arts to write songs about the decay of the society and how the people is living their happy and empty lives without wondering if they are something wrong with their lives and without caring about their quality of life.

5.Can you tell us a little bit more about the artwork that is presented on the album cover?
A: This represents a transmutation of energies when we are living and when we are dead our body is the same and our spirit elevates unchained to the great dissolution.

6.The bands has been around for 10 years but has very little music released so far, can you tell us a little bit more about the earlier years?
A: Tons of changes during the lineup, really, tons of changes that broke the project to release more material. After the Release of our debut EP, we were writing some songs with that line up that was about  to be our debut album and it would be released about 2015-2016, that line up was splitted up during mid 2014 and I’ve started to work on the debut album from scratch with new musicians during 2015, the results of it was Shrine Of Negativity, that was meant to be released on 2016 but we had tons of struggles with the artwork, there was some artists who were dumped their Works and other artists were delayed a lot with a prototype 3D artwork, finally, we have this final artwork. Summarizing, the moral of my early experience is work in parallel the artwork and the recording process of the next album, before it, make a brainstorm with the band about it to work with the artist with a concrete idea of it.

7.What are some of the best shows that the band has played over the years and also how would you describe your stage performance?
A: The release gig in July of 2018 in Santiago, was pretty intense,precise and accurate. We played at 3:00 AM but the energy was there. The show visually talking is pretty minimal but dark, without the new trend of using that robes and hoodies and the stage full of candles and incense as many bands are doing right now, IMHO we’re right to the bone, get up to the stage and play giving focus on the music.

8.Do you have any touring or show plans for the future?
A:Not yet, but we are open to do it, right now we are planning to do some self-produced gigs in Santiago, just we need a good booking agency to do the tour.

10.On a worldwide level how has the reaction been to your music by fans of black metal?
A: It was pretty overwhelming for me the reaction of the people who heard the album, the most weird of it that here in our country was pretty unnoticed compared with the reactions of people abroad.

11.What is going on with some of the other bands or musical projects these days that some of the band members are a part of?
A: Windir (Guitars) is working on a folk metal project with some close Friends of him, Alasthor (Bass) and i are looking forward to do an Old School Death Metal project in parallel to Swarm Of Hatred, and Deathscythe (Drums) is working in parallel with Hades Inc. drummer in a new project influenced by Machinehead and other Groove-Nu metal bands, this is pretty disperse, and i, personally, i’m studying and playing jazz and Bossa Nova by myself in my spare time when i’m not playing Metal and write songs.

12.Where do you see the band heading into musically during the future?
A: Sincerely i don’t know, maybe splitted up after doing some swansong album with the excuse of written all the music that we wanted to write and close the project, but that will not be right now in the near future.

13.What are some of the bands or musical styles that have had an influence on your music and also what are you listening to nowadays?
A: You know, the usual, Scandinavian, French and South American Black Metal, during some songs of the album we use some chords that are pretty used in Bossa Nova, but this are used in our black metal, i want to clarify that we are not mixing black metal with Bossa in no way. As influential bands of Shrine Of Negativity are this: Ondskapt, Dissection, Merrimack, Ved Buens Ende (The fastest parts of the songs), Fleurety (The EP’s Era), Gates Of Ishtar, early At The Gates too, we took some influences of early 2 albums of this almighty band.

14.Before we wrap up this interview, do you have any final words or thoughts?
A: Stay true, keep supporting the underground, follow and support your local bands, there is blood sweat and tears on this hard work.