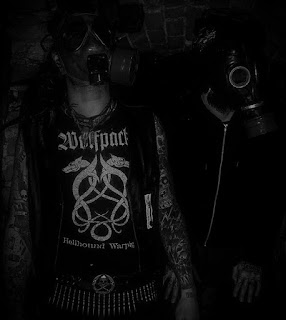 The band was started by me (XVI)  after my latest project went to shit. I´ve always played hardcore punk in one form or another but always tried to broaden the horizons for what punk really is. One day I got tired of punk. The scene is pretty small and no one gives a shit about learning how to play their instruments.

I´ve always had love for the metal scene in that aspect. As a multi-instrumentalist with at least a little bit of music theory and ambition to get better at my instruments the metal scene is an example. The backside of the metal scene is its total neglect of the relation between politics and music. That´s why I got stuck in the DIY punk scene for so many years.

I felt I needed to bridge the gap. I missed a band that had a relentless extreme left stance but could make music as interesting and exhilarating as the far right black metal bands I adored. So steeped in the DIY-ethos as I am, I started that band myself.

I don´t consider TRESPASSER a black metal band at all. For me and everyone else that takes black metal serious (an oxymoron perhaps) black metal and satanism is inexorably intertwined. But black metal philosophy can also be seen as an existentialist movement. And I consider anarchism, which is TRESPASSERs main lyrical topic, to be equally existential.

2.Recently you have put out your first full length, musically how does it differ from your previous demo's?

The full length is the first serious recording. The only demo I made is “1361” and it featured programmed drums and all the instruments were tracked at home using only plug-ins. The vocals were recorded in the rehearsal room.

The songwriting is similar. With TRESPASSER I want to conjure a sublime feeling in the listener. A feeling somewhere between ecstasy and despair. A gut-wrenching and tear-jerking feeling that there is no point to anything, a feeling of nihilism if you will, and still inspire hope, faith and the will to fight. In that aspect it touches on traditional black metal song writing and lyricism; it is deeply religious music in a sense.

This might seem contradictory. But I see it as crucial to be able to both stare down in the abyss and claw at the skies.

3.The lyrics on the new album have a concept involving Ukraine under the anarcho-communist revolutionary Nestor Makhno, can you tell us a little bit more about the songwriting and your interest in anarcho and communist politics?

Nestor Makhno is an inspiring character to begin with. If you don´t know much about it I think the lyrics of the record might be a good start. I also included all my references in the lyric sheet.

I stumbled across the Makhnovist movement around the same time I started to develop the theme and image for the band. The WWI aesthetics fits very well with the kind of music I wanted to do. I listened a shit load to Marduk at the time as well, but i felt that WWII is done by so many bands.

It just lined up. I found a part of history that was obscure but very interesting. The Makhnovists had such integrity in their revolutionary strife. Their slogans were almost already the perfect black metal hooks. They gave up everything for their dream, they died for their beliefs and their faith. It was just meant to be. And I was astounded that no band had ever done anything about this before.

Plus I saw it as an opportunity to educate myself on the political movement I claim to be a part of - anarchism.

4.What are some of the other lyrical topics and subjects you have explored with your music so far?

The full length isn´t exclusively about Makhno. “To the Barricades” is from the Spanish Civil War in the 30´s. “Black Flags on a Blood-Red Horizon” features phrases from “Les Anarchistes” which I think was recorded in the 60´s.

It´s really a cut´n´paste collage of anarchist history. But it isn´t all just tributes. I´ve tried to nuance it a little bit and provoke self-critique in the anarchist community. But as always, when an artist puts something out there it´s no longer the artists work - it belongs to the listener.

The first demo was about “the Battle of Visby” which was a medieval battle on Gotland between the Danes and the Gutnish peasant population. A total massacre with a clear class perspective. Read about it!


5.What is the meaning and inspiration behind the name 'Trespasser'?

I wanted something with ties to the primary axiom of anarchism - “property is theft”. I also wanted it to have some religious connotations. A trespasser is both someone who does not respect the physical property of the bourgeoisie but also a sinner within the theological world. To forgive the trespasses that has been brought against us is essential to building a better world.
And either way - if you identify with the trespasser of theology or not - the name and the concept awakens a lot of feelings. In me anyway.


6.Can you tell us a little bit more about the artwork that is presented on the album cover?

It´s basically pictures from the Ukrainian/Russian Civil War that I have stolen. Together with the people at Heavenly Vault Records we created the final artwork.

I wanted it to look old and more or less accurate for the epoque I was addressing in the lyrics. Also I didn´t want another black and white black metal cover. I wanted the background to be white, or at least light. And the pictures from that era are so beautiful so I wanted to use as much of them as possible. Plus I love horses.

The full length cover is a spin off of the “Tachanka”-single cover. That design I stole from an old Ukrainian folk-record. I can´t tell you which, cause I don´t know myself anymore. I had the original in front of me when I made the single cover, but then I never found it again.

The poster is modeled after an old Soviet propaganda-poster originally meant to rally the Cossacks for the communist revolution. But the picture is from the Black Army (Revolutionary Insurrectionary Army of Ukraine).

The vinyl circle is the part which I´m most happy with. That is also copied from an old Soviet-era vinyl circle. I just remade it, piece by piece, but with anarchist revolutionary imagery.

Yes. For the tour that´s planned for September 2019 I have recruited two additional members.
Леопольд will be handling the drums and Gyða Hrund will play guitar together with me. We are still in the process of finding a bass player.

8.Recently 'Heavenly Vault' released the album on vinyl, can you tell us a little bit more about this label?

They contacted me when I had released two songs online and I was looking for a label. They´re based in Leipzig and have released some sludge and black metal stuff before. It´s a really small label which fits perfectly for me. Really nice, warm and hard working DIY-idealists that share my world views. Check em out: https://vaultofheaven.bandcamp.com/

The reactions have been great. So far I´ve gotten three good reviews and a bunch of appreciation on the Youtube-upload. Some offers to release the songs on cassette. And booking the tour is going great. But I think its mostly in the more political DIY/punk milieu.

Black metal fans probably don´t like it that much. At least in Sweden they have a tendency to be quite orthodox. And to mix BM with politics is haram. I´ve posted in one of the bigger groups for black metal in Sweden and didn´t even get a response. I guess that´s all well and good. I´m not looking to be a part of the Black Metal Scene, as it were, I just want to make epic music for epic people.

More blast beats! Jokes aside, my vision is to create something that´s more than music. Be a part of a political network that works for the world revolution.

Music-wise I think the next release will be similar. I want to create brutal, relentless extreme metal with a lot of variation that makes you feel shit. I want to make film music, an epic sonic drama that transport you away from the boundaries of this world. Both spiritually and physically.

Marduk, Immortal, Dissection. But that kinda goes without saying if you listen to the album. Apart from that I really love Martyrdöd and Wolfpack/Wolfbrigade when it comes to both production and emotional impact.
I still hold Nile's “Black Seeds of Vengeance” as the paramount of death metal greatness. An album I return to year after year, and one of the albums I´ve listened to the most times in my life, since my best friend in 8th grade and I discovered it when it came out.

Stay curious and keep the faith!