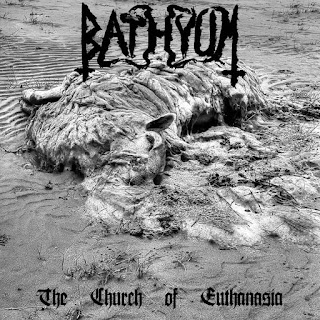 Atmospheric  soundscapes  start  off  the  album  along  with  some  operatic  voices  start  off  the  album  before  adding  clean  playing  onto  the  recording  while  the  drum  beats  are  all  programmed  before  going  into  a  heavier  direction  which  also  introduces  grim  yet  high  pitched  black  metal  screams  onto  the  recording.

Bathyum  creates  another  recording  that  remains  true  to  the  old  school  style  of  black  metal  that  was  on  his  previous  release,  the  production  sounds  very  dark  and  raw  while  the  lyrics  cover  suicide,  murder,  celestial  entities,  paganism  and  old  folklore  themes.


https://bathyum.bandcamp.com/album/the-church-of-euthanasia
Posted by OccultBlackMetal at 9:41 PM