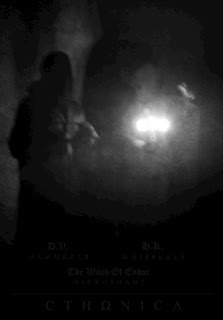 1.For those that have never heard of you before, can you tell us a little bit about the musical project?
1. Cthonica started as the evolution after a brief incubation of a first appareance; twisting the elementals of our own self-exploitation we conceived a more ravaging form of performing the music that we wanted to transmit. Also, after the lethargy, a renewal of concept was conceived as well and everything was specifically signed to the purpose we wanted to transmit with it.

2.You have your first full length coming out in October, can you tell us a little bit more about the musical style you went for on the recording?

2. The recordings on Typhomanteia are basically a return to the primitivism where we started from; it’s all primordially reduced to that. As I’ve mentioned before, we’ve exploited the most extreme side of the ideas we had and conceived something, in our perception, more ‘relentless’ and ‘heavy-sounding’. All that thanks to Necrosound Studios who had a perfect approach on what we’ve first recorded and also translated it into towards abyss where we wanted to recite this work.

3.Some of your lyrics show an influence of Nietzsche, can you tell us a little bit more about your interest in his work and also are there any other philosophers that have an influence on your views?
3. Nietzsche has undoubtedly been a huge motivation in my life-experience definitely, and specially in this times we’re living, for sure. Correctly accepted, his notions joined with our ethos were well-amalgamated although the idea on Typhomanteia wasn’t to be a nietzschean apology; but the influence is present, indeed. I should also add other magnific minds as Isidore Lucien Ducasse (for his majestic- romantic approach on natural human evil), Dante Alighieri (for his glorious everlasting verses that materializes passages from absolute glory to infinite horror), Charles Baudelaire (for his permanent épater that dissolves reason into human perdition); which is basically the main focus on the axiom “Sacred Triarchy Of Spiritual Putrefaction” and, of course I have to mention François Rabelais, which in a deeper philosophical way, depicts the act of living as a crawling creature in his own bowels: copious and negligently scratching his last breath to a miserable end

4.You also go into some occult and left hand path areas lyrically, can you tell us a little bit more about your interest in the dark arts?

4. The Supreme And Absolute Omnipresence Of Death. The other notions added to this base, are just the convulsing-expanding tentacles of that primal will.

5.What is the meaning and inspiration behind the name 'Cthonica'?
5. Claiming the THrone Of Noxious Illuminative CAtharsis; perpetually reciting.

6.Can you tell us a little bit more about the artwork that is presented on the new album cover?
6. The whole artwork (cover and inlay) was an attachment from BMS Illustration; and depicts perfectly the symbols / mottos / “logos” of Typhomanteia’s concept: The Sacred Triarchy of Death.

7.The band members also participate in 'Okkvlt', musically how do they differ from the work you have done with 'Cthonica'?

7. Okkvlt was a first step given in order to claim the beginning of what would manifest later under the name of “Cthonica” and specifically translated through “Typhomanteia”. The creative process was very similar and also was something that since today we still enjoying and consider an elemental part to understand what Cthonica would become later. Unfortunately due foreign circumstances, all the labels that supposedly “supported” that work, ended up in a total deception due their lack of responsibility; until we finally released it through Panamanian label Profaner Records, reaching it at what we considered an acceptable release considering the standarts we wanted to maintain with for that one specially.

8.Currently there are only 2 members in the band, are you open to expanding your line up or do you prefer to remain a duo?
8. Cthonica started as a two-headed entity and will prevail until the end of his time.

9.Your album is coming out through 3 different labels, while I am familiar with the first two mentioned I am not so much with the third one, can you tell us a little bit more about 'Clavis Secretorvm'?
9. With Clavis Secretorvm we have a very brief relationship but it’s definitely what I should consider a fact to be thankful for. As much as we are with Sentient Ruin and Caligari Records for making all this possible.

C.S. operates as one of (in my opinion) the most devoted labels whose premise is to uphold underground sonorities with all the compromise. I guess it is (and should be) all about that, Compromise and devotion.

10.On a worldwide level how has the reaction been to your music by fans of dark, extreme and underground metal?
10. Recent comments have been quite positive and of course we appreciate them as well for the support to this new apparition; we’re thankful with everyone out there who supports this work physically or not.


11.Where do you see the band heading into musically during the future?
11. Surely the same as today. Live performances are something that we’re not interested in right now, and it’ll not be part of our schedule for a long time probably, although we don’t discard anything.

12.What are some of the bands or musical styles that have had an influence on your music and also what are you listening to nowadays?
12. Relentless and primitive Black Metal of Death; abyssal ambiances and obscure transmissions from the wretched. For all those who walk under that sign, we hold respect.

13.Before we wrap up this interview, do you have any final words or thoughts?
First of all thanks to you for this consideration. Nevertheless and from now on Cthonica will not respond any other interview; as basically what we had / have to say, it’s firmly and honestly wrote in this previous lines.

Expect the further spasms of the birth we gave and is slowly disemboweling.

https://www.facebook.com/CthonicaTriarchiaSacrae/
Posted by OccultBlackMetal at 11:15 AM