Ollie: Molde have been an off/on band since the early 2000s. An earlier version blended post-metal with black metal. I put it to bed for a few years and then paired up with Lord Darkstorm a few years ago and decided to keep it in a more straightforward BM mode. There’s only 2 of us for now and we are based in Cork in Ireland. I take care of all the music while LD focuses on lyrics.

Ollie: Well, it differs a lot from the stuff from 10 years ago, but it’s similar to our material from the split EP with Cursed Coven “Journey Through the Enchanted Forest”

3.The band was broken up for 6 years, what was the cause of the split and also the decision to reform?

Ollie: That version of the band is gone now, all the previous members have moved on or moved away. It was a natural break with no acrimony, it was not an “end” as such but more of a “hiatus”. Also I started a family and that tends to dominate your time!

I had some material lying around that was more traditional BM and LD wanted to adapt it and add lyrics which worked really well and formed our EP from 2 years ago.

4.What are some of the lyrical topics and subjects the band explores with the newer album?

LD: Lyrics refer to the ancestral past on the Isles...when Gods thrived, when man was one with them and nature... they speak of returning to your heritage and roots, while taking you on a journey through the spiritual realm of the Ancients...

5.What is the meaning and inspiration behind the name 'Molde'?

Ollie: “Molde” is a Middle English word meaning “the dust to which human flesh returns after death” - I liked this as it reflected my personal atheism and the notion that life returns to nature. It’s also a really cool meaning!

Ollie: Lord Darkstorm represents an older world view and has interests in the ancestral past. I am more rooted in the modern world. LD is interested in keeping a link to the past in this modern world. The artwork represents a figure from the past struggling to fend off futuristic threats (if you look closely, it’s a robotic vulture). The message itself? Is open to interpretation :)

7.Currently there are only 2 members in the band while there was a full line up in the past, are you open to expanding your line up or do you prefer to remain a duo?

Ollie: Right now I’m keeping it to a receding band only and don’t have immediate plans for touring.

8.The band members are from Ireland and Poland, what kind of impact does this have on your musical style?

LD: Given our two nations are much alike and we share similar history, the fascination for the music falls under the common interest section *laughs*

Ollie: That’s an interesting question, Poland had some strict conventions when it came to BM in the 90s but I feel Ireland has no burdens of the past and is open to different streams of influence. Which also reflects the nature of Irish people. So, this creates a natural creative tension in the band and forces us into new territories, a GOOD creative tension.

9.Has the band done any live shows in the past?

Ollie: In the previous iteration of the band Molde performed live, but it was mainly limited to the local scene.

LD: So far- positive feedback, some people would like the early 90's touch for a distinct change from all the 280/mph stuff that seems to be out there nowadays *laughs*

Ollie: Reaction has been quite positive. And we have over 3000 Youtube views combined, which is a good indication.

11.What is going on with some of the other bands or musical projects these days that the band members are a part of?

LD: Darkstorm is currently working on a new upcoming LP which will be in the vein of "The Oath of Fire" LP. Whilst this is currently in progress, I have been focusing on a folk project - Ravensdale.

Ollie: I have another local band on the go, which is veering towards filthy death metal - currently recording and still deciding on a name :)

Ollie: I think we have hit a good balance between old and new. I am less traditional than LD *laughs* but I see a continuation of exploring the same creative space that brought us to this point.

Ollie: Previously mid-period Enslaved had a big influence on me. Along with classic Emperor and Arcturus. Mixing this with Neurosis gave an individual style. Current listening keeps changing, I’m liking the latest MGLA and Father Befouled right now. And I’ve loved Elder for the last few years.

LD: Stay true to who you are!

Ollie: There are no rules, keep breaking and making! 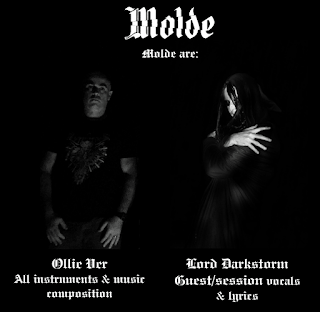