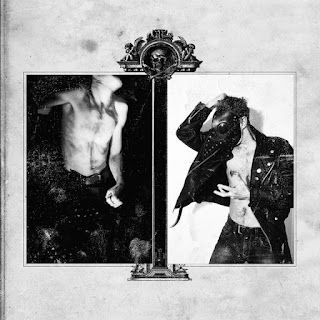 In 2008/10 I was very bored and tired about black metal. It happened to hear too many bands equal to each other and without personality and I believed that even Tenebrae in Perpetuum had become one of these. I had lost enthusiasm and inspiration to be able to write new music and in 2010 I stopped the band's activities officially.

I think this latest album is the mad and insane I've ever written. Musically it is more complex and violent and the voice transmits absolute desolation and insanity. This time I used different cold and raw electronic sounds coming from oscillators with an analogue sound that gave more variety to the music and gave it a slightly more "modern" and original but always extremely dark and mystical character. These electronic parts are one of the new features of the new album compared to the previous ones.

3.This is also your first release since 2010. can you tell us a little bit more about what has been going on during that time frame?

From 2009 to 2016 I didn't write any kind of music but from 2016 I started writing again some very strange NON metal music and little by little I found new inspiration also for Tenebrae in Perpetuum, also thanks to having found a new drummer and other positive circumstances. A bit of that strange NON metal music can be listen in some moments of "Anorexia Obscura" while all the rest of what I wrote maybe one day will see the light under another name. It is a very slow, sad, desperate, unusual and experimental stuff. In 2017 I wrote a new song with some electronic parts, I don't even know why, which I then completed the following year and was included in the compilation for the 15 years of Debemur Morti prod.
This song seemed very interesting to me and I thought it could be a new beginning for Tenebrae in Perpetuum and in autumn 2018 I started writing the new album.

4.What are some of the lyrical topics and subjects the band explores with the new release and also how would you describe your progress as songwriters over the years?

Almost all the texts talk about the relationship between mental and nervous diseases and its consequences on the body. This report is often described as self-torture by devices of cold silicon, sharp steel, strange oscillations that induce hypnosis, etc., all in a very obscure, insane and mystical context.

Regarding my progress, I now believe I am more free from the black metal style constraints than 10-15 years ago and I could experiment a little more.

5.Some of your lyrics deal with mysticism, can you tell us a little bit more about your interest in this topic?

I have no particular interest in these subjects, I am simply a rather solitary and contemplative person and therefore probably also in a certain sense "mystical". I feel a sacredness for certain things like nature, music and also for other things. The real Black Metal I think is full of this sacredness and I want it to be present also in Tenebrae in Perpetuum.

This time the artwork was edited by a professionist, Cold Poison, and not by myself. It is quite different from the previous ones. The cover is perfectly connected with the topics covered in the texts I mentioned in the previous answers. To Antithesis of Cold Poison I first explained my ideas on how I wanted it and then he proposed me that image of the dead-head in ancient anatomical card style, I liked it immediately and, above all, it perfectly fits the themes of the album.

7.Currently there are only 2 members in the band but there was a full line up in the past, are you open to expanding the line up or do you prefer to remain a duo?

Only in the 3rd album of 2009 we were 3 members and the line up was never really complete. Tenebrae in Perpetuum has always been composed by me and a drummer who takes care of his instrument. Until 2010 the drummer was Vidharr (Chelmno, Near, Profezia, Beatrik) while in 2018 Chimsicrin (Gorrch, Lorn) arrived. A complete line-up is not necessary because we have no intention of performing live.

8.The band has been working with 'Debembur Morti Productions' for more than 10 years, do you feel they have been very helpful when it comes to getting your music out there heard?

Having a label with a good network of contacts and promotions behind it is very important for the spread of a band, especially nowadays when the quantity of bands, labels and information is enormous and it is important to be able to attract attention. Sometimes I even think that the promotion for us is too much and I wonder what an album like Anorexia Obscura is doing on many web-magazines next to power and gothic metal reviews, since the average reader of these sites could hardly appreciate it .

Many were surprised and still excited about our return. After so long they didn't expect it and neither did I. When I started writing the new album a year ago I was convinced that few would remember Tenebrae in Perpetuum instead it seems that this is not the case. The reviews and comments I've read seem to me to be very good and this glad me. Tenebrae in Perpetuum however remains an underground band as far as the amount of fans is concerned, also due to the fact that above all this last album is very extreme and disturbing and certainly not suitable for everyone.

I haven't written anything yet but I have several ideas about what an upcoming album might be. The experimental and electronic parts, I think, will be even more present, although they must still have the typical characteristics of Tenebrae in Perpetuum, that is, it must be extremely dark, violent, mystical and insane Black Metal.

As for the more Black Metal part, the material that Tenebrae in Perpetuum has published in the past inspires me a lot and in any case the influence of the masters Mayhem and Thorns is always important to me. The most electronic parts present in Anorexia Obscura instead were inspired by the rock / electro rock music that I have been listening to for the last 10 years.

No particular final thought, only thank you for the space and support. Greetings.