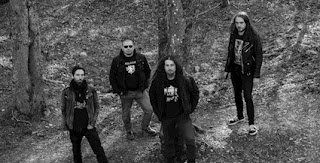 1.Can you give us an update on what has been going on with the band since the recording and release of the new album?
Hello ! Actually, not so many things have happened since the release of our new album « Ars Gallica ». We have been booked on a couple of black metal festivals, but I will talk about that in the next answers. At the moment, we are just beholding and enjoying the positive reactions to this new record.

2.Recently you have released a new album, musically how does it differ from the stuff you have released in the past?
I would say that « Ars Gallica » is some sort of synthesis between « L’Aube du Déclin » (our first album) and « Frères de Sang » (the second one). It combines the epicness and « medieval » influences of the first and the more brutal and cold atmospheres of the second. Also, it took more time to compose it. The previous records had been composed within more or less a year whereas it took about 3 years to come up with the new songs for « Ars Gallica ». I think that the main difference is that I really did not urge into finding new riffs and ideas. For example, when I didn’t know how to finish a song, I just left it behind for a few months and would come back to it later, and the end would come almost in a natural way. We also experienced some new things like clean vocals and progressive instrumental parts (I’m mainly referring to the song « Aux Grands Hommes la Patrie Reconnaissante ») and tried to emphasize the contrast between very fast blastbeating parts and more mid-tempo sections.

3.Your lyrics cover history, mythology and war, can you tell us a little bit more about your interest in these topics?
It is quite a vast interest to be honest. It started with writing lyrics more generally on French and European mythology, war periods and some historical facts. Our first album « L’Aube du Déclin » was some sort of homage to the European cultural background, thus the lyrics dealt with Gaul Wars, Roman Empire, the birth of the world in Greek mythology, French middle ages, and so on… « Frères de Sang » focused on the rivalry that existed between France and Germany from 1870 to 1918, so it was really more into exploring both the heroic and monstruous sides of war. And at the time we thought it just made sense to us as Europe was « celebrating » the 100-year anniversary of World War I.
« Ars Gallica » has a different approach. The lyrics have a lot of references to History, and especially the French Revolution and its royalist resistance, but don’t directly deal with History. They were written as some sort of poems and the historical references actually serve another goal.

4.On your facebook page you said you had some patriotic ideas, can you tell us a little bit more about it and also do you feel people are very confused on what this actually means in the more modern society?
Yes, I think it is an important thing for us to express our pride to inherit the fascinating culture of France. This is the main reason why we have been putting the slogan « Black Metal de France ! » here and there in our works since the beginning.
It is some sort of « response » (even though there is no rivalry !) to the Black Metal scene from Québec. I really admire this scene which shows to my mind a strong unity and it is even more interesting to be able to kind of taste their cultural background through their music.
Neptrecus is a patriotic band understood in the way that we really have deep interest, devotion and gratefulness in our ancestors’ culture and land. And it is our personal reaction to this absurd and shitty modern world that just wants people to behave like insane rootless consumers.
Of course, there are some people who are not able to understand that but we just don’t care, after all they are just a part of the system and have no importance.

5.What is the meaning and inspiration behind the name 'Neptrecus'?
« Neptrecus » is latin for « Neustrie », which designated a Frank kingdom in the Middle Ages covering a great part of what is today’s French territory. At the time I was looking for a band’s name, I wanted someting that directly referred to where I came from, and this one just made perfect sense.

6.Can you tell us a little bit more about the artwork that is presented on the new album cover?
The front cover artwork was made by Calvaire Drach (www.lodrach.com), a very talented French designer.  As « Ars Gallica » basically means « French art », we wanted an artwork that would be some sort of an homage to French artists we admire (at least, a few of them as they are so many). So you can find three main references in this drawing, namely « La Pastorale » and « L’Angélus » by French painter Millet and an engraving by the famous Gustave Doré (the church in the background). It combines elements that are present in the lyrics : peasants, religion and old stone works. I think they are a good representation of old times’ French deep country.

7.What are some of the best shows that the band has played over the years and also how would you describe your stage performance?
We haven’t toured a lot since we have been performing live, but some of the best memories definitely are our gig in Rouen (Normandy, France) in December 2017 which was just crazy as the audience were unchained and maybe our latest gig in Paris, in January 2019, as we were playing in front of more than 250 persons and with very good sound conditions, on a very nice stage. Actually most of our gigs our quite good memories to us, but I won’t talk about them all, it would be pointless !
About our stage performances, I think we can call them « straight into your face ». We don’t really have a proper stage show, we do it the old school way : it is just us with our energy, strength and hate, and of course the heavier sound we can get at the venue with the provided backline.

8.Do you have any touring or show plans for the new album?
For the moment we only have two booked shows, namely on 14th December 2019 in Lille, France (Black Flame of Hate festival) and on 25th January 2020 at Heretic Metal Fest in Belgium.
We are looking to perform further shows in France and Europe so feel free to book us (neptrecus@gmail.com) if you are a gig organizer/promoter reading these lines.

9.On a worldwide level how has the reaction been to your newer music by fans of black metal?
It has been excellent ! We had orders from everywhere in Europe, but also in the USA and Japan, and everyone seems to be very enthusiastic about this new record, so it is very rewarding to us. There also have been a few very nice reviews here and there, it has all been absolutely positive at the moment.

10.What is going on with some of the other bands or musical projects these days that some of the band members are a part of?
Our drummer also plays in French bands Griffon and Hats Barn that are both currently working on new albums, which should come out next year. I also advise you to check A/Oratos (involving our guitarist) and Anus Mundi (two of our members involved), they have released some nice stuff lately.

11.Where do you see the band heading into musically during the future?
It is hard to say, as for the moment there is no new material written for any next release…I have some ideas, some riffs which might suit the next songs to come, but it is definitely way too early to tell what it will sound like in the end. From what we have now, I would say it will be some more « progressive » material, longer songs with longer instrumental parts and more work on harmonies, maybe more complex songs. That’s at least what it feels like today. But once again, we really don’t know for now, and it may sound completely different.

12.What are some of the bands or musical styles that have had an influence on your music and also what are you listening to nowadays?
We have a very wide range of influences actually. But what influenced mostly Neptrecus’ music is definitely black metal from the 90’s with of course, the classics from Scandinavia (no need to say more, we all know them), but also the early French black metal scene, especially bands like Himinbjorg, Crystalium, Belenos, Forbidden Site, Anorexia Nervosa, etc. There are also bands from Eastern Europe like Nokturnal Mortum, Drudkh or Hate Forest that had a huge impact on us as composers. Otherwise, our music takes its roots into more « general » genres like classic heavy metal from 70’s and 80’s or early thrash metal bands. We actually are not only into black metal. We also like and listen to various genres of music, as long as it has a musical interest and it comes from the guts.

13.Before we wrap up this interview, do you have any final words or thoughts?
No special words needed, just thank you for this interview ! Our new album « Ars Gallica » is available on German label Purity Through Fire (www.purity-through-fire.com) and our Bandcamp page. And of course we are looking forward to performing on stage wherever it may be possible !

neptrecus.bandcamp.com
Posted by OccultBlackMetal at 10:50 PM