Day Of The Beast Interview 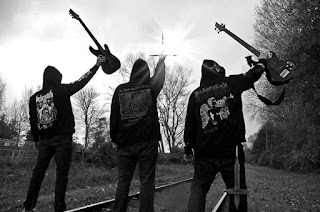 1.Can you give us an update on what has been going on with the band since the recording and release of the new ep?

First of all, thanks for giving us the opportunity to give an interview in a foreign country.

At the moment, we are working on our set for our future gigs coming in September and October.

Next to this, we also started to compose some songs’ ideas for our first full length album.

2.In December you had released a new ep, can you tell us a little bit more about the musical style you went for on the recording?

We took our inspiration mainly in the old school black metal, I mean, the first wave in the 80s / early 90s with bands such as Venom, Bathory, Celtic Frost …

We also try to put some more modern sounds in our songs. It is a team work so that everybody can bring his touch to the music. We all listen old school Black Metal but also other kind of style (True Black Metal, Death Metal, Thrash Metal…)

3.Your lyrics cover some satanic, occult and anti Christian themes, can you tell us a little bit more about your interest in the dark arts?

We are inspired by all kind of stuff referring to Occult / Satanism. We don’t want to blame Christianism but in our lyrics we explain our point of view concerning this ideology.
People are free to believe in who / what they want that’s for a fact.
We just play music that we like and sharing this with the more people possible.

4.What is the meaning and inspiration behind the name 'Day Of The beast'?


5.Can you tell us a little bit more about the artwork that is presented on the ep cover?

The artwork of our “ First Invocation “ had been made by our Russian friend ALEX SHADRIN who works for his own design company :  Nether Temple Design.

Alex was really cool with us and understood immediately what we want to show on this cover and he did an awesome work with this design. We, once more, thank him a lot for his great work.

For the moment, we only played 1 show in our region in France : LE RED BAR in Boulogne sur Mer.

We share the stage with 3 other great bands from France : Fire Wheel / Crushburn and our brothers IN HELL who invited us to share this stage with them.
This was our first show and it was really great moment. Audience was there and headbanged with us with rage.
We just got the feeling that playing on stage is the best thing for a musician to see that people has a nice moment sharing with us.
Our stage performance is mainly based on a dark / occult atmosphere.
We all 3 wear costumes on stage to increase the feeling that you will live like a black mass.

Yes we already have 2 shows planned in the coming weeks :

We received some interest from 2 labels but for the moment we prefer taking our time to compose our album then we will reflect all together regarding what would be the best for the band. But as we said, now it is time for preparing our coming shows and working on the album.

We were so surprised that webzine / radio from foreign countries has so much interest for just our first EP.
We got people from Australia, USA, Italy, Belgium, Germany, UK that sent us really nice comments about out music and support us in their respective countries.
We would like to thank all of these people for their support which provide us the strength to make a goddamn first album.

Special thanks to Kelly Tee from The Metal Radio in Australia who was the first to believe in us and posted review on her Youtube Channel and Facebook page.

10.The music on the ep had a lot of roots in the first wave style, do you feel black metal has lost a lot of the things that made the more appealing in the earlier days?

It is true in certain way. Nowadays with all the progress in Technology (amplifiers / pedals / computers …) people quite lost the Truth of the old school wave. I mean the sound is sometimes too much perfect according to me. Also there are more and more modern subgenre in the metal which are more popular (deathcore, hardcore …) compared to Black Metal.
When we created the band, we wanted to bring back the old school style in Black Metal even if it was risky to make such “old” style of music but in the end we bet and we won 😊

11.When can we expect a full length and also where do you see the band heading into musically during the future?

As we said before, we are currently working on the album. We take the time to make things that we like and that people like in our EP.

We also create longer songs, with some atmospheric background without forgotten the old school touch of course and powerful music.

As we said, we all 3 listened different styles which is a strength for our music as we can mix everything together to compose songs.

We all 3 listened to old school black metal of course but for example we also listening to Heavy Metal, Thrash Metal, War Metal …

We want to thank you for giving us the opportunity of an interview and also huge thanks to all the people that support us all around the world.
Without them we are nothing.

And get ready for a big blast…

Posted by OccultBlackMetal at 11:04 AM