Deviator are a 1 man band from Ukraine that plays a very primitive form of ambient pagan/black metal and this is a review of their 2011 compilation album "Way Of Warriors-Hymn To Immortals" which was released by Glorious North Productions.

Drum beats range from slow, mid paced to fast parts with a good amount of blast beats being thrown in the music, while the synths have a very dark ambient/avant garde and depressive sound to them with a funeral edge at times, as for the bass playing it has a very dark tone with riffs that follow the riffing that is coming out of the guitars.

Rhythm guitars from slow, mid paced to fast raw and primitive sounding black metal riffs and there are little to no guitar solos or leads present on this recording except for the last song, as for the acoustic guitars when they are utilized they use finger picking to enhance the darkness of the music.

Vocals are mostly hateful and grim sounding black metal screams that have a depressive sounding edge at times with a brief use of spoken word parts in addition there is a small use of demonic growls being utilized on one song, while the lyrics cover death, darkness, occultism, Norse Mythology and individualism, as for the production it has a very raw and primitive sound to it.

In my opinion Deviator are a very good raw and primitive sounding ambient pagan/black metal band and if you are a fan of this style, you should check out this band. RECOMMENDED TRACKS INCLUDE "The Last Day Of Mankind" "Undying Darkness" "Funeral Future Bells" and "Way Of Warriors-Hymn To Immortals". RECOMMENDED BUY. 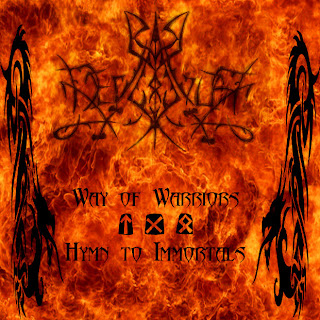