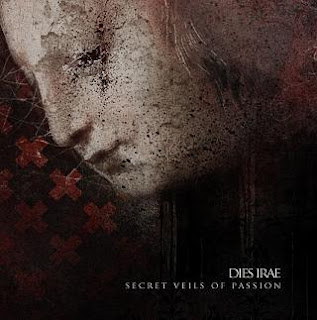 Dies Irae are a band from Mexico that started out a more melodic black/dark metal band but have evolved into a more experimental post rock metal band with this new release and this is a review of their album "Secret Veils Of Passion" which will be released by Chaos Records.

Drums range from slow to mid paced drumming with not much in the way of fast playing or blast beats, while the synths have a very dark, haunting and atmospheric/avant garde sound to them, as for the bass playing it has a very strong and powerful sound with riffs that dominate throughout the recording.

Rhythm guitars range from slow and heavy doomy riffs to a lot of clean and soft progressive rock playing mixed in with a good amount of melody, while the lead guitars when they are utilized are very melodic sounding guitar solos and leads.

Vocals are mostly clean singing with some aggressive vocals that have a black metal tinge but not as much as the early recordings, while the lyrics cover dark and depressive themes, as for the production it has a very strong, powerful and professional sound to it.

In my opinion while this album might disappoint a lot of older fans since this is a long way from the dark metal that they where known for I still feel this is a good depressive rock/metal album, and if you are into this style, you should at least give it a listen. RECOMMENDED TRACKS INCLUDE "Want" "For" E7en" and "Night. RECOMMENDED BUY.