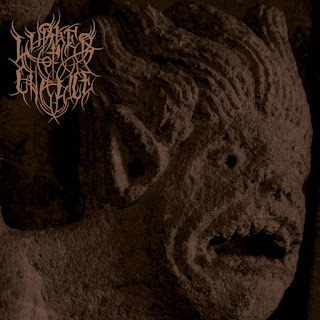 Lurker Of Chalice is a 1 man  project from San Francisco and another one of Adam Wrest of Leviathan's side projects that plays a very militant, dark and ambient form of black metal and this is a review of their self titled 2005 album which was released by Southern Lord Records.

Drums range from slow militant drumming to mid paced and fast playing with some blast beats being thrown in at times, while the synths when they are utilized bring a very dark ambient/avant garde edge to the music with some noise effects being used at times, as for the bass playing it has a very dark tone with riffs that follow the riffing that is coming out of the guitars.

Rhythm guitars range from slow, mid paced to fast ambient black metal riffs that have a very depressive sounding doom metal feel at times, while the lead guitars are very depressive ambient sounding guitar solos and leads, as for the acoustic guitars when they are utilized they use full chords to being a very dark and militant sound to the music.

Vocals are mostly distorted and grim sounding black metal screams mixed in with a small amount of clean singing chanting and spoken word male and female parts, while the lyrics cover depression and misanthropy with a touch of Norse mythology, as for the production it has a very dark and powerful sound.

In my opinion Lurker Of Chalice are a very good dark sounding ambient/black metal band and if you are a fan of this style, you should check out this band. RECOMMENDED TRACKS INCLUDE "Peicing Where They Might" "Spectre As Valkerie Is" "The Blood Falls As Mortal(Part III)" and "Vortex Chalice". RECOMMENDED BUY.

https://www.metal-archives.com/bands/Lurker_of_Chalice/37266
Posted by OccultBlackMetal at 10:08 PM