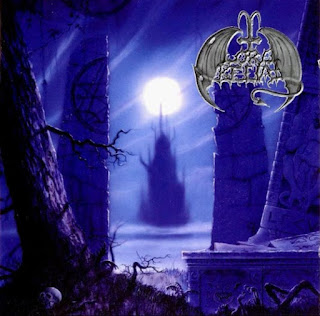 Lord Belial where a band from Sweden that played a very fast, melodic and atmospheric form of satanic/occult black metal and this is a review of their 1997 album "Enter The Moonlight Gate" which was released as a joint effort between Death Records, House Of Kicks and No Fashion Records.

Drums range from slow, mid paced to fast drumming with a lot of brutal sounding blast beats being thrown in at times as well as some tribal style drumming being used on the hidden track, while the flute and cellos when they are utilized bring a very dark medieval feeling to the music, as for the bass playing it has a very strong and powerful tone with riffing that dominates throughout the recording.

Rhythm guitars range from slow, mid paced to fast black metal riffs that are very raw and primitive at times while still utilizing a lot of skill and talent with a great amount of melodic riffing being utilized at times as well as a small amount of thrash and death metal influences, while the lead guitars are very chaotic and melodic sounding black metal guitar solos and leads, as for the classical guitars when they are utilized they use finger picking to enhance the darkness that is coming out of the music.

Vocals are mostly high pitched black metal screams with some clean singing female vocals being thrown in at times as well as a brief use of deep demonic growls and spoken word ritualistic parts being utilized on the least song, while the lyrics cover Satanism, Occultism and Goetia themes, as for the production it has a very strong, powerful and professional sound to it.

In my opinion this was the best album that Lord Belial put out and if you are a fan of this band, you probably already own this recording. RECOMMENDED TRACKS INCLUDE "Enter The Moonlight Gate" "Lamia" and "Belial-Northern Prince Of Evil". RECOMMENDED BUY.

Posted by OccultBlackMetal at 3:20 PM