1. Can you give us an update on what is going on with the band these days?
We just got back from the European tour with Inquisition and it has been a blast. We thank all those souls who felt embraced by our music, bought our merch and shared a bottle or two.


2. How would you describe the musical sound that is presented on your new album and how it differs from previous recordings?
It's still the continuation of the story we had on previous two albums, although we have inclined to some new steps music wise. Not based on a fast-paced rhythmic, we slowed it down and made it heavier, there's even some elements we've never had before and were really interested in the outcome of things.. we wanted to give it all a really big sound, massive guitars with gloomy atmosphere, raging death-invoking vocals and thunderous percussion. Thanx to Mr. Honza Kapak of Hellsound studio who put all his effort in making it possible for us.


3. What are some of the lyrical topics and subjects the band explores with the music?
Our singer Nefas is the main lyrical contributor to the band and is a wicked misanthropic bastard when it comes to composing verses. His themes often refer to the most gruesome endings a human soul can suffer to, invoked by utterly black and devious concept behind it. It is based on one's individual state and demented observations it's entity has towards the World and All that is.


4. What is the meaning and inspiration behind the bands name?
It symbolizes the magic of anti-flesh – the very essence of life negation! The ancient cult of death.

5. What are some of the best shows that the band has played so far and how would you describe your stage performance?
I think it's for every person to make his/her own conclusion of our performance, but so far the best reaction we've got is from people in Slovenia, Czech Republic, all around Germany, Poland and some festivals in Europe: Barroselas, UTBS, Metal Mania etc.


6. Do you have any touring plans for the upcoming future?
We look forward to be back on the road again, yes. We're getting some arrangements for the Autumn '12 tour but nothing is confirmed yet. We'll also play some festivals in summer and hope to get a good tour deal before that as well.

7. I have noticed that on the new recording that music was written in both your native tongue and English, which language do you prefer to write in?
We prefer writing in Serbian, although it is very hard for those abroad to understand exactly what we're saying. So this time we figured to get some of the lyrics written in English. We did have it in the past and we'll get back to it even more with new releases.


8. Currently you are singed to Folter Records, how did you get in contact with this label and how would you describe the support that they have given to the band so far, and how would you compare your current label to the past labels that you have worked with?
Jorg from Folter Records had made contact with the band like 7 years ago, but has been the fan since early days. Cooperation between us has been very satisfying ever since and we have released last three albums for him. Folter Records is well-known underground label and had a big variety of bands on its rooster throughout its (more than) 15 years of existence. Working with him gave us quite an opportunity in the past and keeps revealing new things for us.

9. On a worldwide level how has your new album been received by black metal fans?
I don't think it has been completely received yet. Sure we had some feedback by now and it's mostly all fair and good criticism, but I don't think the album has completely settled down in ears yet. I'm interested in hearing the opinions some time from now, I think it just needs some time to breathe that is.


10. What is going on with the other musical projects these days?
We have some ideas for new Kozeljnik album, a band run by the guitarist Kozeljnik and I. So far, we have released 2 albums and managed to play some festivals in Europe and few shows at home, in Serbia. Other than that, all other projects are currently put on hold.


11. What direction do you see the music heading into on future releases?
I think that we've succeeded in creating our own style over the years to a certain point, by just doing our own thing and this is unlikely to change in years to come. Our style had varied from first up to the third album, being improved with every new recording, but I think last three albums are more connected to each other than anything else. These are our true image and what we tend for others to achieve from listening to it.


12. What are some bands or musical styles that have influenced your music and also what are you listening to nowadays?
We did raise ourselves as true collectors and appreciators of the music devilry, but sometimes it's hard to tell what influences us most. Origins of electric music from beginnings of 60s, sincere devil rock and metal from the 80s, as well as complete extreme metal scene from 30 years back up to the present day. A lot of it really, hard to choose favourites, there's always the influence apart from one that comes from deep within.


13. Does Paganism, Occultism or Satanism play any role in the bands music?
The Stone has a rather devilish Nihilistic concept to it, with cold misanthropic energy channeling from within.


14. Outside of music what are some of your interests?
It's learning about yourself and accepting both challenges what life and spheres beyond it force down upon you and ones you choose to add to your burden. Walk and dream and learn.


15. Any final words or thoughts before we wrap up this interview?
Thanx for the interview and your support. Check out our new album "Golet" and look for The Stone on stage, we will tour Europe again in 2012. 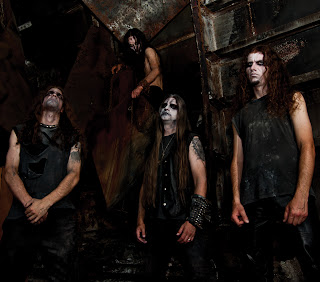 Posted by OccultBlackMetal at 2:15 PM