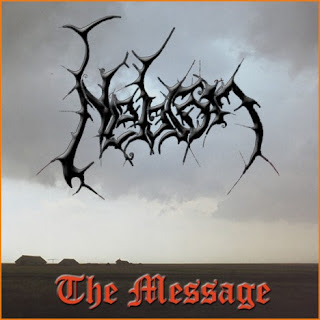 Nebron where a band from Hungary that played a very raw, primitive, melodic and atmospheric form of pagan black metal and this is a review of their 1997 demo "The Message" which was re-issued by Dark Horizon Records in 2000 with bonus tracks.

Drums range from slow, mid paced to fast drumming with a good amount of blast beats being thrown in at times, while the guitars bring a very epic and atmospheric feeling to the music, as for for the bass playing it has a very dark tone with riffs that follow the riffing that is coming out of the guitars and at times they have a very powerful sound to them.

Rhythm guitars range from slow, mid paced to fast black metal riffs that are very raw and primitive sounding with some dark sounding melodies being thrown in at times that have a traditional metal feeling to them as well as a small amount of thrash influences, while the lead guitars when they are utilized have a classic metal feeling to the guitar solos and leads, as for the classical guitars when they are utilized they use finger picking to enhance the darkness that is coming out of the music.

Vocals are a mixture of grim sounding and high pitched black metal screams with a brief use of a spoken word passages as well as a few seconds of deep death metal growls being used on one song, while the lyrics cover Hungarian Pagan Heritage, as for the production it has a very dark, raw and primitive sound to it.

In my opinion Nebron where a very great raw, primitive, melodic and atmospheric sounding pagan/black metal band and if you are a fan of this style, you should check out this band. RECOMMENDED TRACKS INCLUDE "Shadow In A Dreamworld" "Under The Dark Sky" :Lunar Revelations Of The Nocturnal Spirits" and "Eternal Solitude". RECOMMENDED BUY.

Posted by OccultBlackMetal at 8:53 PM