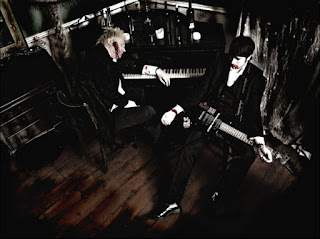 1. Can you give us an update on what is going on with the band these days? Well, apart from the Misantrof compilation album we're starting to write for the next full length. So far we have three original tunes and one cover on the go. It'll be slightly more experimental than Stab Me but still with the massive riffs! We're also gathering personnel for possible live dates and shooting a video for "Bullshit Acres"...pretty busy!


2. How would you describe the musical sound of the new album and how it differs from the previous demo?
Its really an extension of the demo that was a statement of intent...the sound is much bigger and more ballsy so we're pretty happy with it for a first album.

3. How would you describe the lyrical content of the new album? Lyrically this one is very angry at the Government over here - its very anti establishment in all respects, from Religion to Politics. We don't fucking like it! Easy to say, but less easy to change anything and my bleating probably won't help, but it made me feel better!


4. What is the meaning and inspiration behind the bands name? It came as we already had the song "Legions of Crows" - to me, the British Parliament reminds me of a buncha cawing crows sitting in ranked tiers of self serving shit. Its also very Doooom, innit.


5. Has the band had any oppurtunities to do live shows or is this mainly a studio project? We've been offered numerous live shows but didn't have the necessary people. That is being sorted out, however.


6. I have read that the band members have a history that goes back to the NWOBHM days but at the same time you still sound very modern but with a more original sound, what is it that motivates you to move with the times when other musicians from that era still stick to their old sound? Hah! Glad you said that. I grew up with the NWOBHM and most of it was shit. A few bands shone through, like in a lot of genres, but many of them had a couple of decent songs and that was it. I was always more into Punk, early industrial and underground metal than I was that sound so this was natural for me to do...


7. Currently you are singed to Funeral Rain Records, how did you get in contact with this label and how would you describe the suuport that they have given you so far? They were very supportive of us right from the demo and we struck up a relationship through Myspace. We'd had a couple of offers for an album, but Funeral Rain have great energy and are hungry to do stuff. They saluted me and I reciprocated! They, in tandem with Clawhammer are doing a great job now, so we are happy with the way things are going.


8. On a worldwide level how has your new album been recieved by fans of black and doom metal? Generally really good! I have some nice messages from all over the place and the reviews have been 95% very positive. We're looking forwards to reaching and meeting as many new people as possible.


9. What direction do you see the music heading into on future releases? As I said, slightly more experimental as we're exploring other older genres of music to meld with our Blackened Doom assault. There will be elements of German 20s chanson and traditional forms of art within the music, but still with the crushing riffs and massive sound.


10. What are some bands or musical styles that have influenced your music and also what are you listening to nowadays? Very many, from early Black Sabbath through to bands such as Shining and Skitliv. I also like the rawness of Darkthrone and Burzum, so they all make an appearance in my mind when I'm constructing the tunes. Doom and Black metal are the biggest influences along with a punky nihilism that I always loved bands like the damned for.


11. What role does Satanism, Occultism and Anti Christianity play in your music and how would you describe your views on these topics? It has its place in both mine and Revelators hearts for different reasons, so it will always resonate in the music. I'm not into merely screaming "Fuck God" etc as that is too easy to do. I'd rather let my feelings be known through songs like "Fellating the Lamb" and the sarcasm of "Provident Hymn"


12. Outside of music, what are some of your interests? Well mainly I like following Leeds United football club and kicking Manchester United fans. Revelator likes amphetamine. Other than that my hobbies include trying to work out what the fuck the little symbols in Pro Tools mean , motorcycles and studying comparative religions. Its good to understand the enemy.


13. Any final words or thoughts before we wrap up this interview? Thank you for your support and we're gonna be around for a while. We got plans. Sort of.

Posted by OccultBlackMetal at 2:51 PM