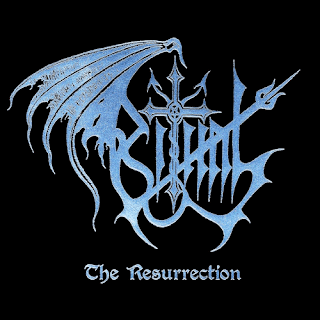 Ritual are a band from California that has been interviewed by this zine a year and a half back that started out as a very atmospheric form of occult black metal but have evolved more into a melodic occult black metal band with this new release and this is a review of their long awaited return album "The Resurrection" which was released by Funeral Rain Records.

Drum beats range from slow to mid paced drumming with not much in the way of fast playing or blast beats present on this recording, while the bass playing has a very dark tone with riffs that follow the riffing that is coming out of the guitars and at times they sound very powerful, as for the synths when they are utilized briefly they bring a very dark avant garde occultic edge to the music.

Rhythm guitars range from slow to mid paced black metal riffs that are very melodic sounding that is very different than the previous recordings, while the lead guitars are very dark and melodic sounding guitar solos and leads, as for the acoustic guitars when they are utilized they use finger picking to enhance the darkness of the music.

Vocals are all high pitched black metal screams, while the lyrics cover dark, satanic, anti christian and occult themes, as for the production it has a very strong, powerful and heavy sound.

In my opinion while this album is a lot less raw and primitive sounding than their earlier recordings  it  is  still a  very  great  recording  but if you are a fan of melodic occult black metal, you should check out this album. RECOMMENDED TRACKS INCLUDE "The Resurrection" "Executioner Of The Elder Gods" "Nightmare" and "Temples Of Baphomets Sons". RECOMMENDED BUY.

www.myspace.com/ritualblackmetal
Posted by OccultBlackMetal at 5:48 PM