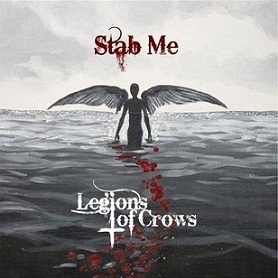 Legions Of Crows are a band from the UK that consists of veterans from the NWOBHM scene that plays a mixture of necro black metal, traditional doom metal and Northern European Hymnody and this is a review of their 2011 album "Stab Me" which was released by Funeral Rain Records.

Drum programming range from slow to mid paced beats with some occasional fast parts and blast beats, while the keyboards bring a very dark and funeral like sound to the music, as for the bass playing it has a very dark tone with riffs that follow the riffing that is coming out of the guitars and at times they have a very powerful sound to them.

Rhythm guitars range from slow to mid  paced riffs that combine necro sounding black metal with traditional and funeral doom metal and at times they are some very raw and primitive sounding fast playing, while the lead guitars when they are utilized are very classic sounding heavy metal guitar solos and leads.

Vocals range from grim sounding black metal screams, clean singing and spoken word parts, while the lyrics cover anti christian themes, as for the production it has a very strong, powerful and professional sound to it.

In my opinion Legions Of Crows are a very great and original sounding black/funeral doom hybrid and if you are a fan of this style, you should check out this band. RECOMMENDED TRACKS INCLUDE "Provident Hymn Malediction" "Defecate" "Dull Grey" and "Coventry Carol". RECOMMENDED BUY.