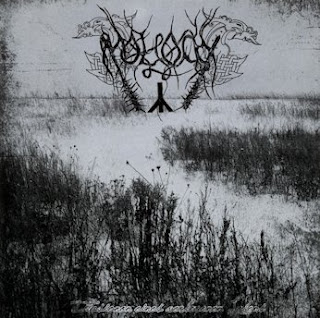 Moloch are a 1 man project from Ukraine that plays a very depressive from of ambient black metal and this is a review of their 2011 album "llusionen eines verlorenen Lebens" which was released by Glorious North Productions.

Drum programming ranges from slow to mid paced beats with not much in the way of fast parts or blast beats, while the synths have a very dark ambient and depressive sound to them, as for the bass playing it has a very dark tone with riffs that follow the riffing that is coming out of the guitars.

Rhythm guitars range from slow to mid paced depressive ambient black metal riffs that are very raw and primitive sounding and there are no guitar solos or leads present on this recording.

Vocals are a mixture of depressive black metal screams and spoken word parts, while the lyrics are written in Ukrainian and cover nature, depression and individualism, as for the production it has a very dark, raw and primitive sound to it.

In my opinion Moloch are a very great sounding ambient/depressive black metal band and if you are a fan of this style, you should check out this recording. RECOMMENDED TRACKS INCLUDE "Ein düsterer Winter kommt ll" "Weg von dieser Welt voller Traurigkeit" and "Abgrund meines Wesens". RECOMMENDED BUY.

Posted by OccultBlackMetal at 4:51 PM