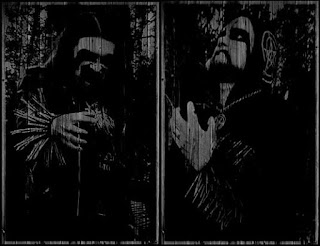 1.For those that have never heard of you before, can you tell us a little bit about the band?
1.Hell`s Coronation was called in its abomination in 2016 to prafane all sanctities of monotheistic religions, especially christianity, we deal with it on a daily basics. It`s cooperation of two squalid souls – Zepar (guitars, vocals, keys) ans Coffincrusher (bass, drums). So far we spit out two unholy acts – EP „Antichristian Devotion” and EP „Unholy Blades Of The Devil”. Next rituals take shape, to present their corruption in a timely manner and make havoc.


2.So far you have released 2 ep's, how would you describe the musical sound that is presented on both of the recordings and also how do they differ from each other?
2.Everything what was released and what will be released with Hell`s Coronation logowill be maintained in the spirit of the 90`s. We consciously cultivate those values, considering this period in extreme metal as the best. All elements of our releases are characterized by this, from graphics to music. This is not plastic metal, we don`t need weeks in studio for cleaning the sound. In studio we are absolute minimum, we end our woek when we have selective dirt and muck. He who is looking for progresive in music and modern solution, should not come close to our carcass. This project is conservative and archaic with full premeditation. On both EP`s we used similar patents, to express the broken emotions in the right way for us, rotenness in the soul. The difference between these two materials is larger quanities of keyspots on second EP.


3.You refer to your music as 'necro ritual black doom metal', can you tell us a little bit more about this term?
3. Our music are sounds entwined with symbolics and a corpse aura,
paying homage to the night and eternal darkness. It`s hellish magma, slowly and intricately flood her victims, leaves fragments of life to rot, let the mold finish it and give back the stench. After this the only thing that remain is dead silence. That`s Hell`s Coronation – nekroritual, black doom metal tormentor.

4.A lot of your lyrics cover Satanism and Luciferian themes, can you tell us a little bit more about your interest in the dark arts?
4.I use many systems, trends and beliefs, they allow me to extend my knowledge. Writing lyrics, i transfer to paper my thoughts and reflections, they undergo transformations becoming an idea. They are signposts for the next course, they help me to place my ego and feel hate to the world. I`m watching surroundings, i`m drawing conclusions. I pass them through the filter of experience gained, and i fish out everything what is important for me and helpful in pursuit of full enlightenment. The point is to understand many powers of the universe through considerations, add wings to primal instincts, and man does not succumb to unnecessary influences. I`m sure i have my balance between my mind and soul. I`m not into any organizations, just individual work on my own. This gives me freedom.


5.What is the meaning and inspiration behind the name 'Hell's  Coronation'?
5. Hell`s Coronation is voice of our dark demons, we give them outlet through our music. Dark side of human nature is intriguing, so also inspirational. We crown the hell, because we`re in oposition to christianity and to the church teachings. But our hell got no biblical dimension . Hell is our daily and reality, we are hell in our contempt for human race. We walk our own path, we crown aversion and abomination, to wothless existence. It`s the direct meaning of this name.


6.Currently there are only 2 members in the band, are you open to expanding the line up or do you chose to remain a duo?
6.Given our acquired experience from previous bands, in which we was contagious, we don`t want to engage anybody in our crusade. Such an assumption was from the first moment, in which i decided to speak under the Hell`s Coronation banner. Coffincrusher agrees with my statement, so this arrangement is optimal, it allows to celebrate magic of rehearsals and create tracks and this is enough in our case. We feel satisfied in artistic way in this configuration, we don`t want to play concerts with this project, so we dont need anybody from outside.

7.On a worldwide level how has the feedback been to your music by fans of black and doom metal?
7.We hear the voices of approval, through the reviews from all over the world. Critical comments are also occasional, so propaganda is making through the label, harvests some harvest. It`s hard to say, how big is this interest. We do not conduct market research in this area, beceause we don`t give a shit. We realize, with our message, which let`s not kid ouselves gets into an airtight niche, we dont reach global recognition. What we do is very personal. We focus only on creation of new acts, which are form of cleansing of any vermin in the soul. Who is supposed to hit us, he will hit us, but for sure not everybody will stay with us for long, if he`s not devoted warrior of underfground with his extreme and filthy form.

8.What is going onw ith some of the other bands or musical projects these days that some of the band members are a part of?
8.If we talk about me, after my departure from Deadthorn, Hell`s Coronation is my priority and here i`m engaging all my creative power. My gig hunger i quench in Nekkrofukk. These few concerts in one year are enough for me and i don`t feel the need for permanent contact with the audience. Coffincrusher also leaves Deadthorn, after he found out about my resignation. He got his mother band Damage Case, with which this year will be recording the third album. Like me, he also supports concerts of Nekkrofukk.


9.When can we expect a full length album and also whare do you see the band heading into musically during the future?
9.After release „Unholy Blades Of The Devil” the next ritual will be split with Cadaveric Possession, we work on it already, we want to record our part and start studio session at the end of march. The premiere is planned at autumn 2018. After this split, we plan focus on full length album. It`s gonna be a continuation of what we actually do, without useless frills, only sultry, obscure metal, fueled with swampy stench.


10.What are some of the bands or musical styles that havehad an influence on your music and also what are you listening to nowadays?
10.Spectrum of our inspirations is very wide, but clear for each , who experience magic of metal before 2 or 3 decades. In our music you can hear echoes of norwegian scene, finnland, swiss, or even greek. Our idea is to stoking the black flame of primordial metal, which was burn with blasphemy in the soul thanks such bands as Bathory, Hellhammer, Mayhem, Satyricon, Samael, Barathrum and Rotting Christ. We can now name many other bands, which have left their mark in our music, but these bands names i called, are ideal translating our invention in relation to the original. We make it intuitively, maybe beceause of our age, but also our music activity in that period. In a sense, history is circling, and for me this, what we do now in Hell`s Coronation, is continuation of these, what i`ve done in Mastiphal. Now i`m overheard in Czort – Czarna ewangelia, Kawir – Exilasmos, Moenen Of Xezbeth – Dawn Of Morbid Sorcery, Huoripukki – Nekala Dungeons, Riivaus – Lyoden Taudein Ja Kirouksin, Glorification – Against All Adversity, Morbid Perversion – Rites Of Lust And Blasphemy, Malokarpatan – Nordkarpatenland, Hades Archer – Temple Of The Impure, Abominablood – Abomination Continues and Cult Ov Black – The Ancient Lurse. Fuck enough hahaha! I could long, beceause i have a lot of things i have to listen to.

11.What are some of you non musical interests?
11.Considering the daily obligations, there`s not much time left for broadening interests other than metal, with all his aspects. It`s 24h passion, not only for weekend. Important is understanding your relatives, beceause they need diferent impulse than me. Many sacrifices are needed to reconcile in this.  After leaving the homestead , if there is time to watch a movie, match or read an interesting book, this is already a feat.


12.Before we wrap up this interview, do you have any final words or thoughts?
12. I`ve got short message – fuck all hipsters, all those cunts in devil metal, this issue should be resolved eventually!. Leave what barbaric for real men, parade like poofs in shopping centers, drinking some fucking mokate, or other macchiato, eat shit vege tofu, there you fit. Rot, you gagged whores! Arrrrrgh...allright....thanx for interview, i go to absorb mystical energy from the forest. Amen...

Posted by OccultBlackMetal at 4:16 PM