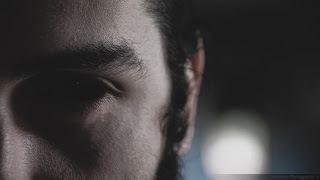 1.For those that have never heard of you before, can you tell us a little bit about the musical project?
1. Kenos is a black metal band that I started several years ago, just after another try in another band that failed to even produce a demo or appear live in no local venue, I decided that it would be better if I controlled the creative process as much as it is possible. I changed names everal times, composed over and over until I came up with Kenos in 2015 I guess : just let my soul unravel in music, with lyrics based upon mythological and occult metaphors, but which also resonates with some events that occurred in my life.

2.Recently you have released a full length, how would you describe the musical sound that is presented on the recording?
2. I'd say I am playing black metal. With doom, and ambient influences, but I guess many other words could describe it. I am not much into etiquettes.

3.What are some of the lyrical topics and subjects you explore with the music?
3. I mainly sing about personnal events on this album , but also about my thoughts on mankind and society. I just try to find some universality in what I want to tell, and put it in parallel with some myths and  legends?

4.One of the tracks is entitled 'Atlantis', do you have an interest in lost civilizations?

4. I do have an interest in lost civilizations. It is really appealing to me. However, I am going to stop there and I will let anyone make his own interpretation of the words I use.

5.What is the meaning and inspiration behind the name 'Kenos'?
5. ΚΕΝΌΣ means 'void' in greek. I wanted a band name that feels like the inside of a black hole, or a botomless pit. That name feels this way to me.


6.With the exception of a session bass  player, you record most of the album by yourself, are you open to expanding this musical project into a full band?
6. It will remain creatively speaking my project. However, it shall appear live. So I guess the answer is yes, but I cannot tell you when just yet.

7.The album was released on 'BloodCrown Records', how did you get in contact with this label?
7. It is a modern-age story. The manager posted in music groups messages saying he was interested in extreme metal bands for his young label. We got in touch, and everything happened.

8.On a worldwide level how has the feedback been to your music by fans of black and doom metal?
8. Feedback is quite good for now. However, it is spreading mainly around social circles just next to my own at the moment, but I am sure it will spread further, given a little more time.

9.Are you or have you been involved with any other bands or musical projects?
9. I do sing for a local black'n roll/sludge band, Frost de Mexico. You should check it out if you are interested. I am involved in other projects with very different styles, but I am not going to talk about it because they are all in a working state.

10.Where do you see yourself heading into as a musician in the future?
10. Well, that is a very interesting question, thank you. I can begin by saying the next album will keep the signature haunting and dissonant sound that I have, but will step into quite unexpected directions, and that is rather normal : I composed "Inner Rituals" somewhere between 2014 and 2015. I discovered a ton of other bands, sounds, even outside of metal since then. So a great leap into the unknown is planned regarding the next album, and depending on what I do until I compose the one after, I hope to keep exploring uncharted sonic territories. You should expect the unexpected from this band in the future.

11. Extreme metal mainly, but freejazz, hip-hop, hardcore  have greatly influenced me lately. I was listening to Sleep this afternoon for instance. But I do have an attrait for anything that stands out by its musical weirdness, like Igorrr.

12. Many, I have a very busy life. I'd like not to sleep sometimes. Software engineering, filmmaking, photography, and many more.


13.Before we wrap up this interview, do you have any final words or thoughts?
13. I would like to thank you for this interview, a lot. And also thank anyone who will read it as well. I hope it is going to make you want to listen to my music.

This is it. Once again, thank you.

Posted by OccultBlackMetal at 6:21 PM