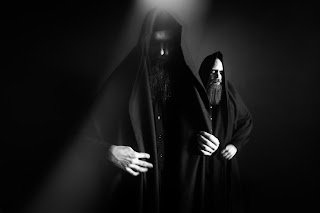 NORN was born out of a fascination with the second wave of Norwegian Satanic Black Metal and the British and Continental Anarcho CrustPunk movement from the early 90s. These are our roots both musically and ideologically. NORN started in 2010 in a basement in Reykjavík, but me and Vltimvs Diabolvs Gvitaricvs had been playing in BlackMetal and DeathMetal projects in Iceland for many years before that. We were both the type of musician who dabble with all instruments, playing drums, guitar, bass and doing vocals. This led to us working together in different constellations before NORN. This was very helpfull for developing a common language when discussing (arguing) about arrangements and composition and has given us common reference points when moving forward. At one point we were writing songs through text messages, played once through at practice and then played live the day after. Whats fascinating about BlackMetal and AnarchoPunk is that both have very strong ideologies. Both are of course  riddled with contradictions, but thats something I personally embrace and I think is an important part of the creative energy of both genres. The tension between contradicting elements is an important ingredient in the energy that feeds NORN.

2.How would you describe the musical sound that has been presented on the recordings that you have released so far?

We have been through a wild ride fighting with, and for, our sound. It may sound counter-intuitive but we have been working hard on becoming more primitive with each release. Yes this is a BlackMetal cliche I know. I don´t mean mindlessly primitive. Primitive in the sense of getting to the core. This is again a question of the creative energy when trying to balance contradicting elements. Firstly its not easy to find sound engineers that will not eq and compress the sound to death! On the other hand, if you lack clarity the music looses power. So its a tension between having the dirt that makes it ugly and aggressive without getting lost in the mud. We have learned much along the way. Writing music is one part of a creative process. Recording and producing it is another. That is why we will never stop making music. Its a journey. No matter how much you learn, you always see the next frontier.

The lyrics are very personal. But the topics vary. Some are existencial, expressing in various ways our dissolutions. Others are more expressive and political. Its important to me that the lyrics are always authentic, even if there is a touch of humor at times. We have songs that are about the alienation of the modern human in an industrialised capitalist society returning to the warm embrace of nature, and then we have lyrics that are dedicated to our genitals. One is naive, the other is childish. But both are 100% honest.


4.I know that the bands name comes from 'Norse Paganism', can you tell us a little bit more about your interest in this topic?

NORN is WITCH in Icelandic. It is true that the northern pagans (rightly) believed reality to be governed by the witches of fate (old norse/icelandic plural: nornir). We ourselves however are much more interested in the symbolism behind witches from a historical perspective. On the one hand witches represent mysticism and superstition, on the other hand they represent nature and pragmatism. So they are both a symbol for realism and romanticism and even a symbol for the difference between good and evil, life and death. Then there is of course the whole political aspect centered around feminism and individualism. This connection between nature and mysticism is really the most important aspect to me though. But it all comes down to yin and yang really. Our world may be black and white, but there is goodness in evil, and there is evil in goodness. If the God has a sense of humor I am sure it is irony. Just look at world religions.

We have had a couple of interesting shows over the years. We often try to work with "noise" artists when we perform, to add something unique to each performance, they often have a new perspective on the soundscape, so thats always a plus. Because our songs range from pure Black Metal to more Crust/Punk elements we have sometimes shifted our focus somewhat depending on the venue and the occasion. Our most extreme performance was probably at Mayhemisphere 2013 where we switched instruments and played naked covered in sheepsblood that we then also poored over the audience. But its not often that a venue offers such performances. In Reykjavík we don´t shy away from playing with punk bands and just showing up in our street clothes and blast through the riffs. Making a show is part of delivering the music, but the riffs are more important than what you are wearing. Playing at the Norðanpaunk DIY festival has been a personal highlight for me over the years. The most fun we have had was probably at the Slow Club in Freiburg Germany. I thought the organiser was joking when he said at 2 AM, after the show, that now the party was just getting started. Well he was not joking, at 6 AM we, and what was left of the crowd, were still headbanging to a metal DJ who lay passed out over the mixer table.

We are currently picking up the pieces after our bassist and co-songwriter passed away recently from a heart attack. Untill we find a way to deliver the songs he took part in writing in a satisfactory way we will not be booking any shows.

7.On a worldwide level how has the feedback been to your music by fans of black metal and crust?

We are a small band obviously. So our exposure worldwide is quite limited. Most of our listeners are from the Icelandic scene and we are quite happy with that so far. We are however happy to have had positive feedback from metalheads in central Europe, Germany, France, Italy, Portugal; and from overseas, Canada, USA and even a fan-letter from South-America. Most of the people that hear about us are people listening to BlackMetal. I have to admit that it is quite moving when complete strangers like the music you are pouring your heart and soul into. Although we are very confindent in the music we are making, our expectations of people actually understanding or liking what we strive for are modest. Our work ethic is that it is more important to be proud of what you achieve than people understanding what or why we do what we do.

8.What is going on with some of the other bands or musical projects these days that some of the band members are a part of?

I am quite proud of an Album I took part in making with the swiss BlackMetal band ColdCell titled "Those" and released on Czar of Crickets. Its honestly one off the best BlackMetal releases from 2017. Also my part in Aria Lamia over the years where I play bass and vocals. You should also check out Grafir and Otto Katz Orchestra that we share members with. Grafir is definetely one of my favorate Icelandic bands.

We are looking for ways to incorporate more D-Beat punches into our songs. But somehow we always end up playing in 3/4ths. Why do riffs sound more agressive when you accelerate to 3/4th?!! Just try taking a 2/4 riff and slowing it down to 3/4 or speeding 4/4 up to 3/4 and you will know what I mean! I´ve also been been working on a colder guitar sound and a return to a higher bpm count. At the moment we are finishing a split release with english bred maniacs Krupskaya that we are very excited about. Very, very aggressive guys (musically) so it is quite a challenge to keep up with them! After that our first priority will be to finish the songs that our recently deceased bassist had been writing with us. Its really important for us to deliver them in an appropriate way.


10.What are some of the bands or musical styles that have had an influence on your music and also what are you listening to nowadays?

We are obviously very influenced by Norwegian Second Wave Blackmetal. Who isn´t? Those early Darkthrone and Burzum releases is something you can dig into again and again (despite the fact that Varg was born braindead). Personally the second big influence are industrial artists such as early Ministry, Berzerker and Static X. There is something about the tension in that kind of music that really gets me hooked again and again. Then there is the whole D-Beat genre. Mix that up and you have an endless array of different combination of styles and sound and tension. This is still the music we listen to today. Obviously we also "go exploring" in other styles of music. There is interesting stuff happening in the whole Cold Wave/Dark Wave scene of course. Native Folk Music is also a bottomless pit of inspiration. I´ve been journeying through mongolian and slavic traditional music and its quite inspiring. I would not try to copy their sound or melodies of course, but the music is intrinsic and purposefull. So much of music we are exposed to is very superficial and metal is no exception. We really try to stay away from music by numbers. Just because something is fun to play at practice doesn´t mean its good music.

11.What are some of your non musical interests?
Well its hard to watch the world flouting towards certain doom and not take an interest. So I guess we would have to say anarchism and environmentalism. But then again, no matter what kind of fascists and idiots rule the world, in the end, nature always wins. So that is a small comfort at least.

There are no limits to what a small group of dedicated people can achieve. This is not only good news.