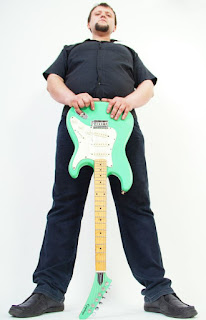 Haissem’s birth was  completely  occasional . The project did appear due to dispute consequences .The matter is that in 2012 , I was a member of pop-rock group and we’d been recording the album that time . Some of songs were heard by my close friend , a true metal head , with whom I’ve played in my first death-metal band . I was told by him that I never will be able to play metal as good as I did it before and ‘’ all this pop-rock is total shit !!!’’ . I retorted and he bet 100 $ against me . I had one track composed , then second , then third …my appetite was growing up proportionally to the quantity of composed songs , and  the whole album was finished at last . Then I’d entered the studio and finished  what I’ve begun . This was the story of  Haissem’s beginning . Money still not mine , actually …

2.You have a new album coming out, how would you describe the musical sound that is presented on the recording and also how does it differ from the stuff you have released in the past ?

I suppose , that I won’t find quite right words to describe . It’s not my prerogative to judge about the sound’s difference comparing it with my previous releases ; I leave it to the judge of fans , of people who’ve heard the albums that were released before . Haissem  as much as possible  tries  to sound like my favorite bands .

3.What are some of the lyrical topics and subjects you have explored  on both  the full lengths and ep?

Actually , there’s no lyrical conception here at all . All the lyrics are fictional and imaginary . No Satanism , no devilworship etc… On the first release there were the stories about the destructive power of fire , about God  victimizing  himself  for nothing’s  hair , the story of mysterious mountain Kholat Syakhl from my point of view , and of people who get  into labyrinth where everything was going on vice versa (this theme conditionally unites the last three tracks and I consider  it  as tryptich). The second release was conceptional in a way, from the lyrical point of view . It was describing all the incarnations of human hatred within the mind of man . There’s a long preamble straighly concerning to  lyrical  making  of ‘’Hatavism’’ - my second release . The new release’s lyrical theme is about the mortality of us , about the subjection to all the possible kinds of temptations , about the Dark Power ruling the world now and self-destruction of humanity  . By the way , the first single – “The Dividing One”  -  is out already .

4.What is the meaning and inspiration behind the name 'Haissem'?

Read “Haissem” vice versa and everything becomes clear about this title .)

5.Can you tell us a little bit more about the cover artwork of the new album?

The cover art has been made by Marusja Tikhiro , a photo artist from my native town Donetsk .In my opinion ,it is a hundred percent reflection of the title – Panacea For A Cursed Race . What kind of cure is necessary for such kind of race ? – The answer is obvious : of course , it is Death . But there is an interesting fact : due to Marusja’s vision , a girl with a flag-adored scythe and tied eyes symbolizes the birth of spring …the birth of new life . In a way , it’s right ‘cause death is the beginning of new life .

6.With this project you record everything by yourself, are you open to working with other musicians or do you prefer to work by yourself?

Yes , I am open for collaboration with other musicians but companions still detected not . I’m planning to attract the session musicians for next release . In addition , last year I’ve recorded guest vocals for one track of the debut full-length of my friend’s black metal project  . I’ve also written almost all the lyrics for his release . So I’m totally  open for proposals and collaborations.

Certainly , I do look for , I do search for the proper label . I’ve sent approximately 150 submissions and requests to the different kinds of labels – from the top ones to almost unknown ones . It’s a pity , but  the result  leaves  much to be desired at the current moment .

Mainly there was pretty good feedback . It was nice to read/hear  it  and realize that my labours were for good reason  . But  the criticism has been occurred also it was concerning  my vocals  . My singings and screams turned out unsutable for the definite groups of fans . But so be it , what’s done is done …  I didn’t have the aim  to satisfy all the tastes that exist . Errare humanum est. There is no band in the world liked by absolutely everyone .

9.Are you or have you been involved with any other bands or musical projects?

I  play in  pop-rock band “Ampula Seven”  (I didn’t give up this rotten business,ha-ha)  ,  writing all the music and lyrics there and playing guitars , bass and keyboards . Also I have doom/death project  “Sunset Forsaken” done by myself  too . The debut album called “ Chameleon Waters”  is on the mixing stage now . I’m an active session musician , I do arrangements , write lyrics for some of our local projects and bands .

It ‘s difficult to say ; with the passage of time it will be clear .  Especially considering the fact , that there is very complicated and unstable  political situation in the East of  Ukraine  where I live . For now I only  wish my albums to be published and heard by fans . Either digitally and physically . And , of course , the opportunity and inspiration to create more and more .

Suppose , there is no sense to enumerate them ‘cause it will take a lotta printspace . Old Man’s Child , Rotting Christ , Cradle Of Filth , Satyricon , Behemoth , Katatonia , Moonspell , Paradise Lost , My Dying Bride , Opeth , Dark Tranquility are some them. But it’s just a  little top of this  iceberg . In general , I listen tons of music of absolutely different genres .

Reading the books mostly , sometimes cooking . But largely owing to my workload   ( my civil profession is miner , I work 500 meters down the ground )  there is no enough time  left  for hobbies . Music   takes the main part of my free time . The rest does take my family .

I wish all the people who read your zine and personally you a lotta health , wealth and endless fortune !!! Be human but stay metal !!! Cheers !!!

Posted by OccultBlackMetal at 10:54 AM