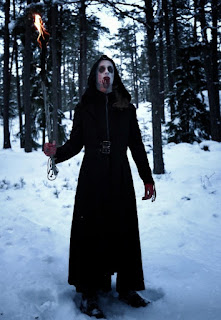 Vox Lvciferi is a one-man black metal-project created by Osgilliath. The band explores the darker realms of the human mind by utilizing the tools of both new and old bands in the genre, plus putting in an experimental nerve.

The debut EP ”Ov Lacerated Soil” (released digitally on the 25th of February 2018) has a pretty dark and atmospheric soundscape with few strains of light extinguished as quickly as they arise. To accompany it is a massive sound with a lot of attention to detail in the instrumentation and well-thought out compositions.

You can hear both references to older records, as well as more recent black metal-bands along the way.

3.You label your music as 'ritualistic misanthropic black metal', can you tell us a little bit more about this term?

Well, it comes from the main subjects of the band which eventually ends up forming a straight line.

The ritualistic part is mainly evident in the whole atmosphere of the project while the misanthropic parts are examined in the lyrics. These two form a unity, which plays into the philosophy of the project. Which is rising above all as a human, through the dark forces and using destructive tactics.

4.What are some of the lyrical topics and subjects you explored on the ep?

Mainly the violent thoughts that exists in our minds. Desperation, anger, hatred and hopelessness are all prevalent in the record. The wish to call upon the dark powers to rid the world of mankind would be the the evolution of it. And the final stage is prevailing over both yourself and everything around you.

5.On of the tracks dealt with 'Sumerian Mythology', can you tell us a little bit more about your interest in this subject?

I’ve always had an interest in history and religion. I remember even as a child, my parents would read Greek mythology to me for instance. I kind of lost it though for a while due to other things taking up my interest, but discovering black metal actually brought back that interest and made me read up on a lot of the deities and spirits mentioned to get a grasp of the power behind these enchanted words mentioned in the lyrics.

6.What is the meaning and inspiration behind the name 'Vox Lvciferi’?

Vox Lvciferi is translated to ”the Voice of Lucifer” in latin. As Lucifer is known as the Light Bringer (from Lux Ferre) it also spins the idea of him as a knowledge-bringer, due to the gift of fire to man which, in a lot of ancient mythology and scientific theory, is where man started evolving in technology. Therefore it can be understood as a voice of reason.

The writing of the name also symbolizes the new and the old, by using the stone carved V for ”u” in older latin, and the newer V in latin writing.

7.On the ep, you recorded everything by yourself, have you ever worked with any other musicians in past bands or projects?

I used to play in a lot of bands in my younger days, but the last couple of years I’ve mainly been a live musician for different projects. I used to do live-bass for Foghorn Lonesome and Nekrodelirium, and nowadays I provide live guitars for Mist of Misery.

8.Currently you are unsigned, you are looking for a label or have received any interest?

That is for the future to decide since it is unwritten, but always open for listening to offers regarding a record label. So far I will continue on being independent, but the door is wide open for other options.

It has mainly been very positive and if not, people are at least interested in hearing more due to them noticing potential in this project.

Currently writing on a full length album and almost getting done with a concept and the skeleton to at least half of the songs.

As Vox Lvciferis idea is to always evolve and try new musical horizons, the future releases will always use foreign ideas not used before in the project and always build on the existing fundament.

It is different stuff and I mainly like to listen to records in their entirety to draw inspiration. For the EP ”Ov Lacerated Soil” I drew heavily from Abigor, old school Tiamat (especially the ”Clouds”-record), Head of the Demon, Tsjuder, Craft and Nightbringer.

I listen to a lot of different music from time to time, whatever I feel like for the moment. But lately I’ve managed to crawl out of my little Summoning-period and been listening to black metal-records from the late 90s. Among them Nagelfar - Hünengrab im Herbst, Dawn - Slaughtersun (Crown of the Triarchy) and Diabolical Masquerade - Nightwork. And to wind off from black metal; some older Paradise Lost and Death in June.

12.Can you tell us a little bit more about your interest in philosophical Satanism?

I started reading up on it in my later teens, as mentioned earlier, and found more and more truths into becoming the person I really am. The satanic ideas don’t find you, but you find them yourself and delve deeper into it. For me it has not always been about the spiritual part or even the religious part, but also the virtues that it has. Hence it led me to reading a lot of Nietzsche alongside Crowley and grimoires and finding out even more about who I really am. Once there I really found the right path for me and the will to change into my ultimate self.

13.Before we wrap up this interview, do you have any final words or thoughts/

I would firstly like to thank you for this great interview, and would add that the debut EP ”Ov Lacerated Soil” is up on both bandcamp and youtube.

Posted by OccultBlackMetal at 1:30 PM