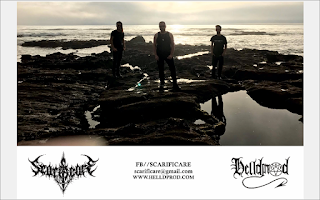 1.Can you give us an update on what has been going on with the band since the recording of the new album?
Greetings!
Since the end of the entire recording process we have been preparing all the design issues for the Album and of course rehearsing to play live as soon as possible.

2.You have a new album coming out in April, how would you describe the musical sound that is presented on the recording and also how does it differ from the stuff you have released in the past?
For this third album I wanted to accomplish a natural evolution from "Postulado". In "Tilasm" we have a lot of keyboard parts and plenty of clean vocals and acustic guitars..and I had to modify lots of tempos and parts on most of the musics.. even through the recording sessions.. That has never happened before. In the first and second albums, things were made a little bit more "in your face", and not so studied and delineated. I describe "Tilasm" as an album with an atmospheric and mysterious aura..balancing between those melodic and transcendental parts and the most old school origins of the band.

3.This is your first album since 2013, can you tell us a little bit more about what has been going on during that time frame/
In 2013 our drummer "Njiord" has left the band, and since our bassist "Inverno" was already living in Austria, I had to find new musicians to keep the band alive. Since then, I´ve started to compose new stuff and making auditions for a bass player and a drummer. After our bass player "Eligos" and our drummer Luis joined the band, we started rehearsing the new tracks.

4.You refer to your music as 'gnostic black metal', can you tell us a little bit more about your interest in Gnosticsim?.
Gnosticism designates a set of beliefs of philosophical and religious nature whose basic principle rests on the idea that there is in each man an immortal essence that transcends man himself. Its a matter of finding the truth of all things. I am truly interested in the persian gnosticism and i am still studing the codex within.

5.Your lyrics go very deep into occult, scientific and philosophical topics, can you tell us a little bit more about your interest in those subjects?
I have personnaly been interested in ocultism for many years. My father had several books in his colection that made me "wake up" for those matters.  I think science is still "inside" the occult! There are many things that we dont know...yet to discover. And other already discovered but that "we" dont know...

6.What is the meaning and inspiration behind the name 'Scarificare'?
The name was given by our first drummer "Sothis". The purpose was to have a name that no other band had. A name not in english nor portuguese. A name with a ritual kind of significance. So, he came with the name Scarificare and we all accept!

7.I have noticed that the band members have taken the names 'Quetzalcoatl' the Aztec God and 'Eligos' the Goetic demon, can you tell us a little bit more on how you decided to use those names/
My artistic personification was always Quetzalcoatl. Since I´ve read a book about meso american
mythology and learned about the myth of the Quetzalcoatl divinity I was amazed and decided to use it has my artistic name. That was back in 1995 and of course I still use it! About Eligos I cant answer because I dont know his personal reasons.

8.What are some of the best shows that the band has played over the years and also how would you describe your stage performance?
We had played many good shows through the years..Our first show in the old MetalPoint venue was great because we were so enthusiastic to show our music for the first time. Then the presentation of the album "Perpectual Decline" was also very good. In Spain was great too. And of course in the biggest venue of Oporto with Inquisition was something to remember.
We are not a theatrical band.. We dont use corpse paint any more... Its only the music that matters now. ..

9.Do you have any touring or show plans once the new album is released?
Unfortunately we do not have any kind of tour or show planned yet. We are still working out on our rehearsal room.

10.The new album is coming out on 'Helldprod Records', can you tell us a little bit more about this label?
We already sign with them in our 2d album "Postulado" and they made a very good job in promotion. They are very professionals and great guys! Its a label that has grown a lot lately and have lots of great nacional and international bands from several metal styles.

11.On a worldwide level how has the feedback been to your music by fans of black metal?
Mainly since "Postulado", we have had lots of very good feedback. People from webzines, radio shows, magazines and from other bands contacted us giving their support and good critics. There is no doubt that since Helld.prod promoted us world wide the band has been more knowed outside the county...but still a very long road waits..hehe

12.What is going on with some of the other bands or musical projects these days that some of the band members are a part of?
Our bass player "Eligos" plays guitar in a thrash metal band called Stucker and sometimes live guest in the blackmetal act "Sonneillon BM". I have myself a one mans band called "Gorgonian" with a few releases, but my old bands "Serpent Lore" and "Wrath" broken up decades ago.

13.Where do you see the band heading into musically during the future?
I really dont know. For now, we are focused to get ready and play live. But i can tell you that we will never lose our purpose to make dark and heavy music!

14.What are some of the bands or musical styles that have had an influence on your music and also what are you listening to nowadays?
I really like to explore every kind of genres but honestly black metal and death metal were always my faves.  There are so many bands that i like that its impossible to list them all here...But my fave of all time and the biggest influence for me, that i still listen every single day, is Bathory. Nowadays,besides metal/rock, i am listening to some blues and classical music.

15.Before we wrap up this interview, do you have any final words or
thoughts?
Thank you for this interview and all the very best for you and Occult Black Metal Zine!!!
Stay aware for our realease "Tilasm" at 20 of April! You will be surprised!