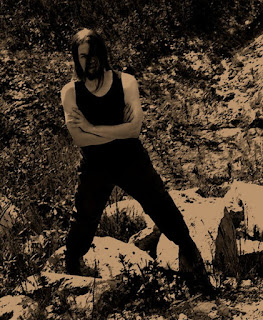 1.For those that have never heard of you before, can you tell us a little bit about the musical project?
In 2008 I got tired of trying to fulfill melodic metal project, so I decided to express my perception of the world using the figurative means common to black metal. I created two projects: Психоз 4.48 (Psychosis 4.48) was meant to show a depressive attitude towards life and  Hexenhammer’s Flame was supposed to express all the accumulated hatred, scorn and resentment. S,W, from Wintercult was helping me with both projects at first, but when the first full-length album has been released, Hexenhammer's Flame turned into one-man band.

2.How would you describe the musical sound that has been presented on the recordings that have released so far with this project?
Hexenhammer's Flame came into being from its demo-record «Мир отвергая» (Resenting the World), which presents the material recorded at home in one day. It was extremely sincere, but had a vast amount of flaws and the sound was rather coarse. Time went by, Hexenhammer's Flame was getting more and more melodic and I began recording the album “ Ad Fines Nivis Aeternae”. It's been re-recorded three times, as I was trying to obtain less coarse but readable sound. Melodic and moderately assertive material was the result of my work.   I added elements of other genres like  death, thrash, modern to two following releases “ Shadow of the Past” and “ Blood of Death Camps” in order to widen the scope of all the figurative means.

3.You are also involved with many other musical projects, what are some of the things that you do differently with this project that you are not able to bring out in your other bands or projects?
Firstly, the specific feature of the project is socially oriented lyrics. And secondly, it's important to mention the fact that I don't allow myself to put the melodious forward in other projects.

4.What are some of the lyrics and topics you explore with this project?
By means of this project I'm trying to understand human nature and its imperfections, the bonds between a man and the nature, the significance of human life within the context of time and social processes. “ Blood of Death Camps” is a conceptual album and it tells us of totalitarianism, dictatorship and modern propaganda through the images of the past.

5.What is the meaning and inspiration behind the name 'HexenHammer's Flame'?
When I was giving the name to the project I wanted to create a certain ambiguity. The first meaning – I am the flame of hatred. The second one – the fire which destroys the vice. I wanted to point out the resentment towards concrete things in the world.

6.With this project you record everything by yourself but have also been a art of full bands, how would you compare the two?
It's easier to work by yourself, as you rule over everything and self-discipline is the only thing needed. It takes less time to prepare the material and to record it. Also it's a constant process of self-development as you need to learn all the specifics of different instruments, carefully listen to other bands' mixes to take up the way of arrangement  and interesting usage of instruments. However, in a full band there's a dialogue between the members, your brain works more. There's always someone who has a different set of eyes on your work. And you have a possibility of giving concerts as well.

7.You have also released many different albums over the years with your many bands and projects, does music take up all of your spare time?
Yes. Moreover, I make up a huge part of the material when I'm on my way somewhere or at work.

8.On a worldwide level how has the feedback been to your music by fans of black metal?
I don't pay much attention to the feedback. I find it very important to create something I'm concerned about. Following the feedback may affect the material as it could conceive a wish to please someone. The only thing I do is the selling of the CDs to those who are interested in them as I can recoup the costs.

9.What is going on with your other bands and musical projects these days?
Now I'm waiting for the split involving  Hexenhammer’s Flame, getting ready to record the vocals for the following Hexenhammer’s Flame album, mixing and designing the second full-length Planetshine album, mxing Психоз 4.48 (Psychosis 4.48) new album. Пламень Мрака, Selfdestroyer,  Вѣдьма are on the stage of recording of the collaborative split. And I'm making the arrangement for Without Dreams' album

10.Where do you see yourself heading into as a musician in the future?
I live in the present and I'm trying not to think of what will happen in a certain period of time, as those plans make a person stiff.

11.What are some of the bands or musical styles that have had an influence on your music and also what are you listening to nowadays?
Nowadays I don't really listen to hard music, I only take a look at the new material of remarkable bands. Ten years ago I could manage to listen 30-70 albums which were new to me, and I don't quite remember what have had an influence on me. I've always listened to various kinds of music genre-wise.

12.Before we wrap up this interview, do you have any final words or thoughts?
I wanted to thank you for the attention. The most important thing for a human being is a constant self-development and understanding of the unknown. Self-absorption and getting to know yourself. Reflexion. A man without reflexion turns into a useless mud under the feet of eternity. I would like to wish your readers to ponder over the necessary, important, everlasting. Be sincere with yourself and the others. And don't bend over for what the stagnated mass, impeding the development, thinks. Good luck to everyone.

Posted by OccultBlackMetal at 7:53 PM