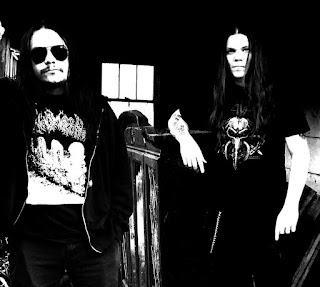 Ritual Possession began in the fall of 2014 as a studio project of
Yaotzin and Canor Morum to produce raw, uncompromising, dark, black metal music.
currently we will have released through VANGUARD PRODUCTIONS a  7 track  cassette EP
it is a testment to black metal in its most die-Hard and underground form.

>
> 2.Recently you have released an album, how would you describe the musical sound that is presented on the recording?

YAOTZIN: The Ep is unrelenting,uncompromising raw black metal.
which carries man negative messages and sounds in its 27 minute running time
definlty a release for those who are into the genre... it will divide the strong from the weak.
>
> 3.What are some of the lyrical topics and subjects the band explores with the music?

YAOTZIN: the darker side of existance as humans, isolation, misanthropy, anti-human sentiments
the truth of death.
>
> 4.What is the meaning and inspiration behind the name 'Ritual Possession'?

CANOR MORUM: I think it's about invoking or becoming something else, through the ritual of creating music.

> 5.Currently there are only 2 members in the band, are you planning on expanding the line up in the future or do you chose to remain a duo?

CANOR MORUM: It's always a possibility, we could add more members or even have guest musicians on a recording. The core of the band will always be the two of us though.

> 6.Has the band done any live shows or is this strictly a studio project?

CANOR MORUM: It's a studio project. If we play live, we would need more members to recreate all of the studio performances. It is something we've talked about but there aren't any plans at the moment. We've both played lots of shows with our other bands. Personally, the idea of playing in front of twenty people at a dive bar isn't very appealing to me. If the right opportunity came along I might change my mind.

YAOTZIN: Yes to play live it would have to be the right circumstances and situation for Ritual Possession.
we will not play live just to play.


> 7.Can you tell us a little bit more about Iron Wolf productions?

YAOTZIN: Iron Wolf PRODUCTIONS started back in 2001 as a small D.I.Y. label I ran to distribute demos/full lengths of bands I was in at the time or one man projects I did. it ended in 2013.
>
> 8.On a worldwide level how has the feedback been to your music by fans of black metal?
>

CANOR MORUM: There hasn't been a whole lot of feedback but what we've gotten has been good. I'm not expecting praise or seeking validation and I tend to ignore criticism on the web from anonymous people with more time than sense. I do appreciate people that take the time to listen.

Black metal is not a very popular genre where we live. Most people can't see past the corpse paint, they don't take it seriously. Or they only know about the murder and arson that happened twenty years ago in Norway and ignore the contributions of bands from other countries from all over the world. I can count the number of real black metal listeners that I know personally on one hand.

> 9.Are any of the band members also involved with any other bands or musical projects

CANOR MORUM:I'm currently working with some other musicians on a project that incorporates elements of death/gothic rock, doom metal, and black and roll. That's about all the information I can share about it at the moment.

> 10.You have a new ep coming out on Vanguard productions, how will the musical sound on the new recording differ than what was on the full length?

CANOR MORUM: Well it's on cassette so it will probably sound even more raw and primitive.
YAOTZIN: its an EP to be released on cassette it's pretty damn raw and dark.


> 11.What are some of the bands or musical styles that have had an influence on your music and also what are you listening to nowadays?

YAOTZIN: yes all the classic black metal from the USA and other countries like finland,poland,germany,Sweden etc
mostly first and second wave black metal for me personally alot of the first wave acts like
hellhammer,bathory,venom,celtic frost,bulldozer.


> 12.How would you describe your views on Occultism?
>

CANOR MORUM: It's a useful tool or method of seeing that I delved into earlier in life. I no longer have the capacity to believe in the supernatural though, the skeptic in me is always looking for evidence. I haven't found much in the way of that. I'm more fascinated by the mysteries of black holes and quantum mechanics. The only true god is entropy and death.

Posted by OccultBlackMetal at 11:09 PM