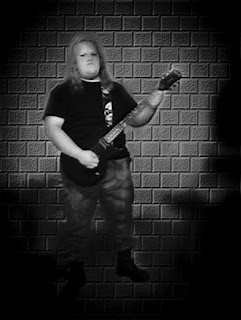 1.For those that have never heard of you before, can you tell us a little bit more about this project?

DW: This project is basically me doing the music i like and being tired of trying to come up with a band name so i just used my name.

2.How would you describe the musical sound that is presented on he recordings?

DW:  It's a mixture of all the sounds I liked as a metal head, from the Depressing tones of Xasthur, the atmosphere of Elderwind, the epic style of bands like bathory and immortal, and the more doom laden and post rock feel of Woods Of Ypres (R.I.P. David)

DW: While worthless deals with more modern ideals and depression in my older works i talked about more sci fi naturalistic ideals and strait up nature. Now my lyrics also deal with some of the racial issues I have Dealt with through my whole life being half Native and Half White and German to top that (insert nazi joke here) and also how these problems will effect my son and his sons.

4.According to the bio you are of Native American descent,which  also has a rich mythology and culture, do you bring this into your musical projects or song writing?

DW: You know funny you ask, not a whole lot on the surface if you look just at the cover, BUT if you look at the way i set up my constant repetitive beats which even fast kinda pulsate ( really so if you are high) and just the mindset i have behind why my lyrics are depressive or how i talk about nature i talk about nature as if its my mother and depression as if its my brother which any person who has dealt with the shit schools and government has thrown at me for the "color" of my skin soul whatever you would get that.

5.With this project you record everything by yourself, are you open to working with other musicians or is this more of a personal project?

DW: It depends cause I do have plans for a bigger album that I want to have other musicians to help on but, I also have a thing with this music personal, Its like at points sexual, and even hateful its like I'm in a different zone when I got a riff going or a good drum line or screams that satan has blessed me with for the day. So in short yes if they can hang I would work with other people as long as they dont mind a loud foul mouthed cigarette smoking beer swilling maniac with a fender strat and a death wish.

6.The new album was released by 'The Apollyon  Entertainment Group, are you happy with the support that they have given you so far?

DW: Yes I am, funny story, When I got signed I wasn't even trying to get signed, but thanks to Craig Foreman, and Tom Budden (Blood Lubrikent) for calling my like 20 freakin' times letting me know Anthony saw a joke a made in a chat forum and took me up for it, I am now signed and liking it.

7.On a worldwide level how has the feedback been to your music by fans of atmospheric and depressive black metal?

DW: Okay real talk I don't really get black metal dudes telling me its good its mostly death metal and metalcore guys, also people who dont even like metal or rock at all like my stuff which is weird to me but hey I'm not picky but at the same time a lot of black metal guys are quiet so I'm gonna go with good cause someone is buying this album.

8.What is going on with some of your other musical projects these days?

DW: Well my name sake stuff is taking up most of my time along with being a father and husband so yeah... Now my older band Hand Of Annihilation is working on something but that is hush hush and I will not and shall not speak to much on that subject so, NEXT!!!

DW: I don't really know, I don't like to look to far ahead cause then I make mistakes. The only thing I expect in the future is a lot more albums, a lot more riffs, and lung cancer if I keep having stress from this music haha but thats the thrill of it.

DW: With bands the list is long and treacherous and at points confusing to people, but my short list for the " must know" people its Woods of Ypres, Bathory, Immortal, Elderwind, ect. oh and Savatage Jon Oliva's compositions give me a hard on. Nowadays its a lot of woods still but now its more Death Metal that has been adorning my earbuds and speakers like obituary and my all time favorite Extreme metal band Cannibal Corpse.

DW: Being a dad, outside of that its hunting I love the outdoors, also Video games like the Elder scrolls Series and fallout series. Wrestling too been a long time wrestling fan. Pro wrestling may I be specific.

DW: Yes.... To kill the inner self makes it safe for the outer self. Also please pick up worthless on your digital platform of choice and all the Apollyon releases, the boys and myself put hard work into these albums. thank you.