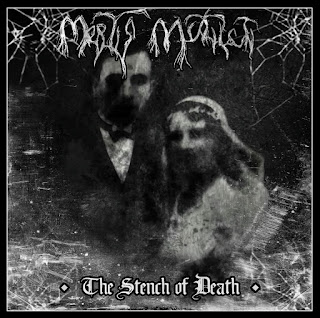 Acoustic  guitar  playing  starts  off  the  album  along  with  some  atmospheric  elements   while  operatic  female  vocals  are  also  used  briefly  and  after  the  intro  the  music  goes  into  more  of  a  heavier  and  melodic  musical  direction  while  also  introducing  high  pitched  depressive  black  metal  screams  onto  the  recording.

Mortis  Mutilati  creates  another  recording  that  remains  true  to  the  funeral  style  of  black  metal  that  was  established  on  previous  releases,  the  production  sound s very  dark  and  heavy  while  the  lyrics  are  written  in  a  mixture  of  English  and  French  and  cover  death,  eroticism  and  taphophilia  themes.

https://www.youtube.com/watch?v=ign6Ex5MNoo&feature=youtu.be
Posted by OccultBlackMetal at 11:20 AM