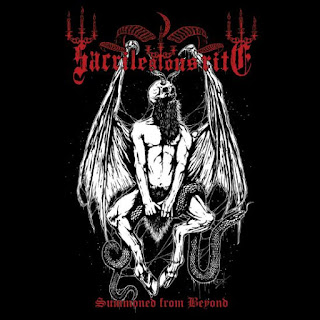 Actually we are restructuring the band. Renewing the line up to make it ready for events to come. After the album we played a lot of gigs and composed new material. Which is ging to be released in 2018.

The sound differs a lot regarding earlier releases. I took the time and energy to work myself into recording matters and produced it all by myself. We got it mastered from by the “Eiszeit studio” in Saarbrücken what turned out to be a good decision.


3.Your lyrics cover some satanic and occult topics, can you tell us a little bit more about your interest in the dark arts?

The dark arts cover most areas of my human existence. The goal is to discover magic and astral forces in every life situation. All can be mastered by willing to give in and being conscious about your weak and mortal shell.

I’ve been a member in two covens which names I don’t want to mention here. But as it is in mundane life it turned out to be nothing for me. The rogue and solitude way is the most promising. Never let other individuals decide and rule your decision and workings. No book on this earth contains the ultimate knowledge or truth. Only through your mastery and experience and for sure only through lucifer himself one is able to reach it all.....
and.... Memento mori! Consider that your shell is not constant! Spiritual death and the insight of it brings you further.


4.The band was formed after the break up of 'Capitas Damnare', is this band a continuation of the previous band?

It was called “Capitis Damnare”.... the band started with the same line up instead of the drummer but is renewing itself permanently. You know.... people get older and lazier.... hardly anyone is willing to invest time and energy to evolve and grow. That should be a rule number one when your band proclaims a luciferian doctrine of becoming!
Capitis Damnare was active from 1999-2010 and Sacrilegious Rite from that on. The music evolved and we went to our roots by finding Sacrilegious Rite. It went back from that kind of typical black metal to more old school Black Death metal. As youngsters we started out with thrash, death stuff. At that time there was only extreme metal.... there was no “label thinking”like it is today.

5.What is the meaning and inspiration behind the name 'Sacrilegious Rite'?

Sacrilegious Rite is like the name says a sacrilege towards the mundane world and life most of mankind lives. It inverts morality, mortality and the religion of the false light. For me it’s the crusade which I have to follow... a lot of people can’t understand that music can be more than just music. That man can be more than just man and even that death can be more than death. Kill your ego which makes you weak and follow the crusade..... that should be the only true agenda of a performing artist and musician. No exceptions and no compromise.

We played a lot of shows... I’m not sure I remember all.... I think the best shows we played at the beginning and short after the finding of the band. We where younger and we found better more motivated musicians to join in.

Our stage performance is quiet simple and more natural. We don’t perform any rituals on stage. That’s a fucking trend nowadays.... we just use blood sometimes and besides we are just ourselves. We also don’t paint our faces..... we are not faceless!

Yes, there are some events and touring planned but it would be too early to talk about it. A lot can change in this fast lived existence.

The feedback from South America and Asia was the best! As we have some old school Brazilian influences the South American guys have always been more into our music than the Europeans. Europe is more trend orientated and the market there changes permanently while we have been on our cause without changing much. For sure we never changed the concept.

9.You have also been a part of a few splits, can you tell us a little bit more about the bands you have shared these recordings with?

Oh yes, our first recordings are to find in the first two splits....with German gods Ungod and Bolivian desecrators of Bestial Holocaust. Sonia sepulchre and me are still allies and she performs on our recordings ever since. Even on the following.

As it seems now we are freeing ourselves from all elements in whatever way which hinder us giving one hundred percent. It’s important for a band to evolve and to grow and sometimes even members miss it to do the next step.

We got more technical and our songwriting is ore advanced but as always the concept remains the same.

That’s a question... I’d say we are pretty much influenced by all black/death/thrash stuff.... say: Sarcofago, old Mayhem, Hellhammer and Grotesque. Just to name a few.

Today is listen to merely the same stuff more or less.... there are some great new discoveries from time to time.

I got sick of all that Blasphemy clones, lately. Bad tongues say we would be another one of them but we’ve never been influenced by Blasphemy. I like that band but as you can listen by yourself that our songwriting is pretty much structured.... only a fucking idiot with no clue at all would draw parallels to Blasphemy. I guess most people draw that lines automatically when they see a band labelled “black/death metal”. For us.... we combine the technical structures with the darkness of black metal. We play both! If you ask me .... I would label us as “old school Death Metal” because we are influenced by times when death metal was still dark and satanic and not dealing with topics like politics and gore! You know? But fuck all that.... we just play our stuff.

I thank you a lot in your interest in Sacrilegious Rite! It’s good to deal with fanzines who also concentrate on the the religious and idealistic part of a band instead of the music only. I appreciate that. I think it’s important to see both sides of the coin! All hails and fortune for your future work!

All Hails lucifer for we are his spawn on earth! 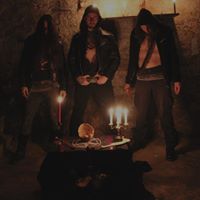 Posted by OccultBlackMetal at 11:45 AM