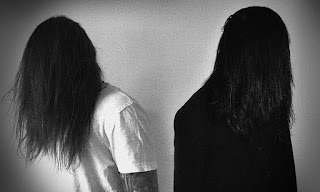 Can you give us an update on what is going on with the musical project these days?

Ivan: Well, we’ve got our debut album Eviternity dropping soon on March 9th. Until then, we’re doing our best to contain our excitement about finally sending this album out into the world.

So far you have released a single and a full length, how would you describe the musical sound that is presented on the recordings?

Ivan: The roots of our music are firmly planted in second-wave black metal, but we’ve also drawn from a wide range of other more recent interpretations. It’s a punishing record, but we’ve seeded each song with a number of moments in which to stop and breathe. Pacing and dynamics were two factors that played significant roles in our songwriting process. It’s important to have balance.

What are some of the lyrical topics and subjects the band explores with the music?

Ivan: This is something we’d prefer to let each listener create and discover for themselves.

What is the meaning and inspiration behind the name 'Kosmogyr'?

Ivan: I’d rather not say.

Originally both members once lived in China but one member moved to the Czech Republic, can you tell us a little bit more about the move?

Ivan: I’m the one who moved. Before leaving, I was in Shanghai for almost nine years — over a quarter of my life — and though Shanghai is an incredible city, I was itching for a change of scenery. Now, my wife and I are living in Prague, where I’m currently engaged as a freelance copywriter and illustrator.

Though Prague is lovely, I’d be lying if I said there wasn’t a lot about Shanghai that I miss quite dearly. It’s truly an amazing city.

Can you tell us a little bit more about the recording process since both of the band members live in different countries?

Ivan: After we’d settled on the final arrangement and structure of each song, using GuitarPro, Xander would record the guitars himself, while also engineering the MIDI drum tracks that I’d written in order to create a more authentic sound. While this was going on, I’d be writing lyrics. Once I’d gotten the instrumental track from Xander, I’d record the vocals in my bathroom with a simple USB mic and Garageband.

Currently you are unsigned, are you looking for a label or have received any interest?

Ivan: Yes, and also yes! But most importantly, yes.

Ivan: Worldwide? That’s hard to say. The handful of reviews that have been published so far have been positive, which is very heartening. There’s still plenty of time to go before the album comes out, so hopefully we’ll be able to continue spreading the word about our music.

On a related note, if you give every album you review a score of 8/10, does the score still retain any meaning?

Are any of the band members currently or have been involved with any other bands or musical projects?

Ivan: Absolutely. You can hear more from Xander with Shanghai melodic death band The Arcbane. My most recent band in Shanghai was The Machinery of Other Skeletons, who are still going strong with a new vocalist and new music. Before that, I drummed and sang with Death to Giants.

Where do you see the project heading into musically during the future?

Ivan: I’d be very upset if this record was the last anyone ever heard from Kosmogyr. I’m eager to build on the foundation we’ve established with Eviternity and to see where we can take our music from here.

Ivan: My two favorite albums of 2018 so far would be The Harlot Star by Frost Giant as well as Bind Torture Kill’s Viscères. I also greatly enjoyed Hawkmoth’s recent album Godless Summit. There’s so much that can easily go wrong with instrumental doom, but these guys nailed it.

Outside of metal, I’m looking forward to the upcoming EP from The Oh Hellos, and I’m still getting a lot of play from Turnover’s latest record Good Nature. Shanghai band Foster Parents are also worth checking out — their 2017 release Grim is a solid bit of instrumental math rock.

What are some of your non-musical interests?

Ivan: My wife and I are both big into tabletop RPGs, and we’re currently involved in ongoing campaigns for both D&D and Shadowrun. I read a lot as well — I’m about to begin Brandon Sanderson’s Oathbringer, with The Long Ships by Frans G. Bengtsson on deck. I also recently picked up a copy of Boccaccio’s The Decameron, which I’m looking forward to given how much I enjoyed Throne of Heresy’s recent album of the same name.

I’m also into cycling, and I brought my bike here from Shanghai. It’s a lightweight single-speed road bike, and though I love going out on exploratory rides, I’m not quite used to Prague’s hills and cobblestones and one-way streets. It’s a far cry from the flat streets of Shanghai and the…ahhh…creative techniques of the city’s drivers. I loved it, actually. Once you learn how to read the rhythm and flow of Shanghai traffic, you can immerse yourself within it on an instinctual level. I’m still learning how to read the traffic here.

Lastly, I love drawing, and it’s always a joy whenever I get the chance to work on a new art project. I’m definitely not drawing as much as I should these days…

Ivan: Eat plenty of vegetables, and dress appropriately for the weather.