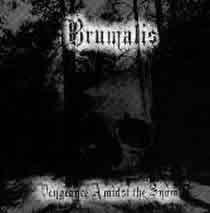 Brumalis where a ns black metal band from the state of Wyoming and this is a review of their underrated  2003  album "Vengeance Admist The Snow" which was released by Graveyard Records Australia".

Drums range from mid  paced to fast with a  lot of primitive sounding blast beats, while the bass playing has a very dark tone with dark sounding riffs which follow the riffing that is coming out of the guitars and on one of the songs they have a very strong bite to them.

Vocals are all high pitched black metal screams with some deep death metal growls thrown in at times and a small amount of spoken word passages on one song, while the lyrics cover Occult, Aryan Race, and Darkness, as for the production it has a very dark and raw feel to it, which was what made black metal in that era sound really great.

In my opinion Brumalis where a very great ns black metal band, and if you are a fan of this genre and never heard this group, you should check them out. RECOMMENDED TRACKS INCLUDE "Kriegswind" "Freihiet" "Lost Wisdom" which is a Burzum cover and "Elegies Of The Voluptuary Nostrum'. RECOMMENDED BUY.

Homepage
Posted by OccultBlackMetal at 4:29 PM