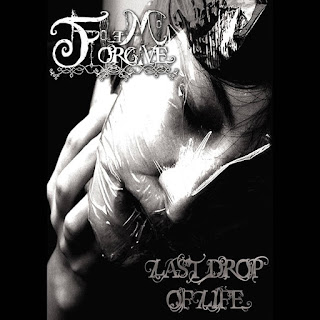 Forgive Me are a band from Jordan that plays a very depressive form of black metal and this is a review of their 2010 album "Last Drop Of Life" which was released by Rigorism Records.

Drums range from slow to mid paced drumming with some occasional fast playing and blast beats, while the synths when they are utilized have a dark ambient depressive feel to them, as for the bass playing it is mixed down low in the mix and seems to follow the riffs that are coming out of the guitars.

Rhythm guitars range from slow to mid paced depressive black metal riffs and only a small amount of fast playing mixed in with some soft sounding playing that has a very tragic feel to it, while the lead guitars have a distorted depressing feel to them and there is not much in the way of guitars.

Vocals are mostly high pitched black metal screams with some deep growls being thrown in at times as well as some spoken word passages, while the lyrics cover Depression, melancholy and personal struggles, as for the production it has a very dark and raw feel to it.

In my opinion Forgive Me are a very good depressive black metal, and if you are a fan of this genre, you should check it out this band. RECOMMENDED TRACKS INCLUDE "Funerals Of Birth" "Life_Nightmare" and "My Wrecked Branch". RECOMMENDED BUY.

Posted by OccultBlackMetal at 2:34 PM