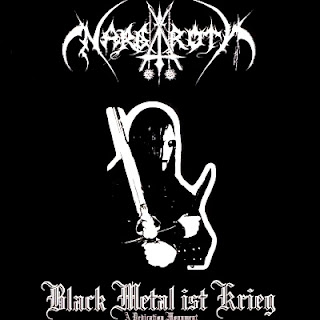 Nargaroth are a band from Germany that claims to have been around since 1989 although other sources would say somewhere in the early to mid 90's which plays a very raw form of black metal and this is a review of their classic 2001 album "Back Metal ist Krieg" which was released by No Colours Records.

Drums range from slow, mid paced to fast playing with a lot of brutal blast beats, while the bass playing has a very dark tone with riffs that follow the riffing that is coming out of the guitars which you can actually hear at times.

Rhythm guitars range from mid paced to fast raw black metal riffs that are very dark sounding with an old school sound as well as the occasional slow dark sounding riff that has a depressive feel to it before it became a huge genre and there are little to no lead guitars or solos present on this recording, as for the acoustic guitars when they are utilized, they bring a depressing and tragic feel to the music with a touch of the primitive side.

Vocals are mostly high pitched black metal screams with some samples taking out of movies and documentaries as well as some clean vocals being used briefly on one song, while the lyrics are written in a mixture of German and English and cover Satanism, Occultism and Black Metal, as for the production it has a very dark, heavy and raw feel to it.

In my opinion this was a classic album from Nargaroth and if you are a fan of this band, you probably already own this album. RECOMMENDED TRACKS INCLUDE "Black Metal is Krieg" "I Burn For You" "Erik, May You Rape The Angels" and "Possessed By Black Fucking Metal". RECOMMENDED BUY.