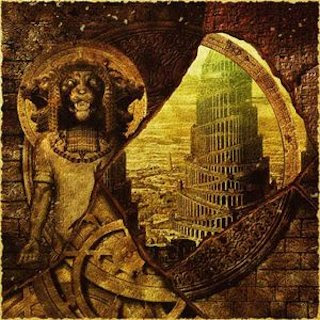 Melechesh are a band from Israel that later relocated to The Netherlands with a music style that I would describe as being Middle Eastern influenced occult black metal and this is a review of their 2007 album "Emissaries" which was released by Osmose Productions.


Drums range from slow, mid  paced to fast drumming with a  lot of brutal blast beats being thrown in and some percussion being used at times, while the bass playing has a very heavy tone with riffs that follow the riffing that is coming out of the guitars  along  with some   powerful bass lines being used at times, as for the middle eastern instruments when they are utilized they bring an Arabic feel to the music.

Rhythm guitars range from slow, mid  paced to fast black metal riffs that also take influences from middle eastern music as well as thrash and traditional metal, while the lead guitars have a traditional metal feeling  to them, as for the 12 string guitars when they are used, they bring a darker feel to the music.

Vocals are mostly high pitched black metal screams with some clean singing vocals being thrown in at times and some pagan/occult chants mixed in with some occasional death metal growling, while the lyrics cover Sumerian Occultism and Cabalistic Magick, as for the production it has a very professional and heavy sound to it.

In my opinion this was another great album from Melechesh, and if you are a fan of this band, you probably already own this album. RECOMMENDED TRACKS INCLUDE "Ladders To Sumeria" "Touching The Spheres Of Sephiroth" "The Scribes Of Kur" and "Emissaries And The Mysterium Magnum". RECOMMENDED BUY.