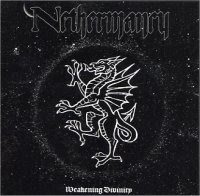 Nethermancy are a band from Portugal that plays a very raw form of atmospheric black metal and this is a review of their 2003 album "Weakening Divinity" which was released by Hiberica.

Drums are mostly fast with a good amount of blast beats thrown in and on the instrumentals there is a slow repetitive beat going on, while the keyboards have a very atmospheric sound that does not overpower the raw music that is presented on this recording and on the instrumentals they bring out a dark ambient sound, as for the bass playing it has a very dark tone with riffs that follow the riffing that is coming out of the guitars.

Rhythm guitars are very fast and very primal raw black metal riffs with a small amount of slow and soft playing being used on one song as well as a slow repetitive riff being used on the instrumental and there are no lead guitars or solos present on the recording which makes the music a lot more darker.

Vocals are all high pitched black metal screams, while the lyrics cover evilness, black magick and anti christianity, as for the production it is very dark, primal, heavy and raw sounding.

In my opinion Nethermancy are a very good raw atmospheric black metal band, and if you are a fan of this genre, you should check out this band. RECOMMENDED TRACKS INCLUDE "Torments From The Hellish Beasts" "cosmic Apocalypse" and "Cursed Thorns Of Christ". RECOMMENDED BUY.

Posted by OccultBlackMetal at 9:55 PM