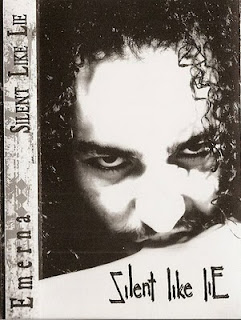 Emerna are a 1 man project from Iran that plays a very depressive from of  ambient/black metal and this is a review of their 2009 album "Silent Like Me" which was released by Thorn Lacreation Records.

Drum programming is mostly slow to mid paced beats with not not much in fast parts, while the bass playing has a very dark tone which follows the riffing that is coming out of the guitars, as for the synths when they are utilized they bring a dark ambient depressive feel to the music.

Rhythm guitars are mostly slow to mid paced ambient/black metal riffs that have a very depressive feel to them and there is not much in the way of lead guitars and solos.

Vocals are a mixture of high pitched black metal screams with some mournful spoken word passages and deep growls with some clean singing being used on the last song, while the lyrics cover dark, gloomy and depressive themes, as for the production it has a very dark and raw feel to it.

In my opinion Emerna are a very good ambient black metal band, and if you are a fan of this style, you should check out this band. RECOMMENDED TRACKS INCLUDE "Silent Like Lie" and "Empty Hell". RECOMMENDED BUY.