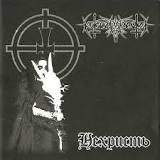 Nokturnal Mortum are a band from Ukraine that plays a ns form of folk influenced atmospheric pagan/black metal and this is a review of their classic 2000 album "NeChrist" which was released by The End Records.

Drums range from mid paced to fast drumming with a lot of brutal blast beats, while the keyboards give the music a very symphonic sound mixed in with a lot of folk instruments that bring a pagan feel to the music, as for the bass playing it has a very dark tone with riffs that follow the riffing that is coming out of the guitars and on a couple of songs they have a very strong sound.

Rhythm guitars range from mid paced to fast raw black metal riffs that utilize thrash influences at times with some melodies being used at times that have a classic metal feel to them while the lead guitars have a very distorted extreme metal sound without overdoing the guitar solos, as for the acoustic guitars when they are utilized they bring an ancient sounding medieval pagan sound to the music.

Vocals are mostly high pitched black metal screams with some pagan chants and the occasional clean singing female vocals, while the lyrics are written in a mixture of English and their native tongue with the subjects covering Slavic Paganism, NS and Anti-Christianity, as for the production it has a very raw, dark bu still somewhat of a professional sound to it.

In my opinion this was a classic album from Nokturnal Mortum, and if you are a fan of this band, you should already own this album. RECOMMENDED TRACKS INCLUDE "The Funeral Wind Born In Orinia" "The Call Of The Aryan Spirit" "Jesus Blood" and "Perun's Celestial Silver". RECOMMENDED BUY.

Posted by OccultBlackMetal at 7:18 PM