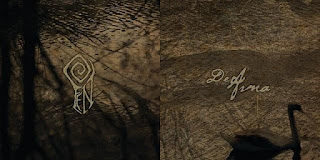 This is a review of the split album between Fen and DeArma which was released by  Nordvis Productions and we will start of the review with Fen a band from England that plays an ambient form of black metal with a post rock edge.

Drums range from slow to mid paced playing with not much in the way of fast drumming or blast beats, while the keyboards sound very tragic and atmospheric, as for the bass playing it has very dark tone with riffs that follow the riffing that is coming out of the guitars and on a couple of songs they have a very powerful sound.

Rhythm guitars range from slow to mid paced ambient black metal riffs that have a very depressing sound with some melodies being used at times, while the lead guitars have a really depressing and tragic feel to them with a doomy edge, a for the acoustic guitars when they are used briefly they use finger picking and full chords to enhance the darkness.

Vocals are mostly high pitched black metal screams with some clean singing vocals being thrown in at times as well as the occasional deep growl, while the lyrics cover depressive and melancholic themes, as for the production it has a very dark sound to it.

In my opinion Fen are a very good ambient black metal band and if you are a fan of this style you should check out this band.

Now we are going to review DeArma, little is known about this band and they play a raw form of ambient black metal with an avant garde edge.

Drums range from slow, mid paced to fast with some blast beats, while the synths very atmospheric and ambient sounding, as for the bass playing it is mixed down low in the mix and seems to follow the riffing that is coming out of the guitars.

Rhythm guitars range from slow, mid paced to fast raw ambient black metal riffs, while the lead guitars have a very dark and tragic sound to them.

Vocals range from clean singing to high pitched black metal screams, while the lyrics touch on dark themes, as for the production it has a very primal and dark feeling to it.

In my opinion DE Arma have he best songs on this album, and I would recommended this album to all fans of black metal that is more directed towards to ambient, shoegaze and post rock genres.