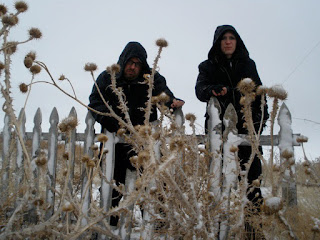 1. Can you tell us a little bit about the band for those that have never heard of you before?
We formed in 2006 to create a dark music that is open to various influences and ideas as an expression of our darker thoughts. We used to have different members but as times gone on theyve gone the way of dinosaurs, leaving us to just a two piece, but with the advent of having our own recording software and computers we can be a whole band just by ourselves. Our music is essentially dark rock/metal, strongly influenced by black metal as well as bleak rock music. Our musical landscape is a ravaged one of pain, longing, desolation and despair.

2. How would you describe the musical style that you go for on the new releasese?
The musical style is a mixture of dark metal with gothic elements, we decided to go for a more metal element on our newer releases, where the older ones had a more gothic, post punk sound.

3. What are some of the lyrical topics that the band explores on the new releases?
Sex, murder, hatred, betrayl, child abduction, depression.

4. What is the meaning and inspiration behind the band's name?
The silver cord is that which binds our spirit to our flesh and is a fragile link that can be easily broken.

5. I have noticed that both of the members come from different generations, how do you feel that contributes to the music?
The biggest thing is that we have a bigger range, because both of us are coming from different musical backgrounds, giving us a wider source of influences and sounds to pull from. Obviously we have certain musical tastes in common, but the differences help to expand our musical horizons.

6. Have you had any oppurtunities to play outside of Colorado, and what are some of the best shows that the band has enjoyed playing the most?
We have yet to play in other states, though that is something we are looking to do in the near future. We enjoy playing at the Larimer Lounge mainly because theyve been supportive of us since the beginning and their sound and stage are well set up.

7. What is going on with the side projects these days?
Karl: Well we have a few side projects, for Karl there is primarily Pesten Reich, a black metal project centered around WW2 and ghost phenomena as well as his older projects like Taliesin which are pretty much on hold, though I'm looking to get some underground releases on labels for those projects. Ken: Art of Malice finished the full length cd recently, Art Of Malice is basically a personal side project about intimiate perspectives of my life for people who are interested, but wont be released to the public.

8. Right now the band is unsigned, do you have any plans to sign to a label, and if so, what kind of label do you think would be the perfect fit for the music?
A label who is supportive of our musical genre, and will help to get our music out there. We are mainly looking to get exposure in places outside of the US because the US isnt particularly receptive or supportive of dark metal.

9.How would you describe your musical progress over the years and what direction do you see the music heading into on future releases?
Our musical progress has been from a more gothic post-punk beginning to adding in harder elements, and focusing on more disturbing subject matter. We're working on new material that is turning out to be more moody and melancholy, but still retaining elements of the dark metallic approach we have had in the recent past.

11. Does Occultism or Paganism play any role in the music?
No.

12. Outside of music what are some of your interests?
Art and sex.

https://www.facebook.com/thesilvercorddenver/
Posted by OccultBlackMetal at 2:20 PM