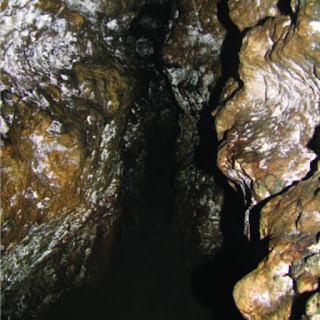 Shroud Of Despondency are a band that was originally from Michigan and now reside in Wisconsin that has been around for 12 years with a style that I would describe as being raw black metal with a progressive edge and this is a review of their self released 2011 album "Dark Meditations In Monastic Seclusion".

Drums alternate between slow, mid paced to fast drumming with some brutal blast beats being thrown in at times, while the bass playing has a very dark one with riffs that follow the riffing that is coming out of the guitars and they sound very strong and powerful at times.

Rhythm guitars are mostly slow, mid paced to fast raw black metal riffs that also have a progressive feel at times as well as an upbeat feel with some catchy riffing, while the lead guitars have a classic rock feel in the guitar solos, as for the acoustic guitars they use a lot of full chords and being a progressive/folk feel to the music mixed in with some slide guitar effects.

Vocals are mostly deep and high pitched black metal screams/shouts that have a hateful/depressive feel to them with some clean singing male and female vocals which some lot a combination of classic metal and modern day progressive/folk metal mixed in at times with some spoken word passages, while the lyrics touch on philosophical as well as depressive themes and the occasional witchcraft/paganism, as for the production it has a very dark and raw feel.

In my opinion this is another good album from Shroud of Despondency and while it is a lot more progressive than the album that I heard from them years ago which was more black metal sounding, I still feel this is a good album that should appeal to the more open mined fans of black metal. RECOMMENDED TRACKS INCLUDE "Homo Homini Lupus" and "To Glisten In All Colors Of Distress'. RECOMMENDED BUY.

www.myspace.com/shroudofdespondency
Posted by OccultBlackMetal at 2:39 PM