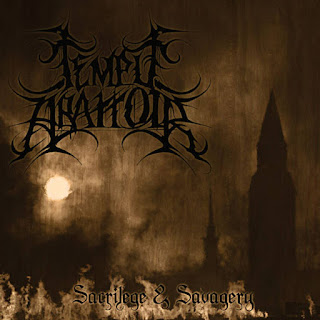 Temple Abattoir are a band from Spain that has had their previous release reviewed in the zine with a musical style that I would describe as being raw black metal and this is a review of their 2010 cassette "Sacrilege & Savagery" which was released by Nigra Mors.

Drums range from mid paced to fast with a lot of brutal blast beats, while the bass playing has a very dark tone with a sound of its own that is very evil sounding.

Rhythm guitars alternate between mid paced to fast raw black metal riffs that are also very brutal and contain a good amount of melody and on one track that use a slight thrash edge, while the lead guitars are very chaotic and melodic sounding black metal guitar solos.

Vocals are mostly high pitched black metal screams with some deep death metal growls thrown in times and on a couple of tracks there is a small amount of spoken word female vocals, while the lyrics cover anti christian themes with a touch of Luciferian and Necromantic philosophies, as for the production on this recording it has a very dark and raw sound to it mixed in with a great amount of brutality.

In my opinion this is another great release from Temple Abattoir and if you where a fan of their previous recording, you should enjoy this one as well. RECOMMENDED TRACKS INCLUDE "Luciferian Discipline" "Necromantic Amok" and "Seven Torments Over Megiddo". RECOMMENDED BUY.

Posted by OccultBlackMetal at 9:14 PM