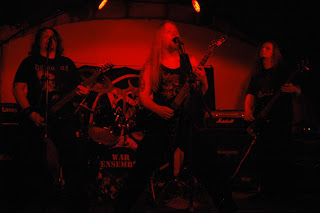 1.Can you tell us a little bit about the band for those that have never heard of you before?

We are from Brno,which is a moravian metropolis and the second largest city in Czech republic.The first impulse for the formation of the band appeared in 2009 but the band started to work actively until 2010.
During the year 2011 the  lineup settled to its present look :

With this lineup we started to promote ourselves and play more concerts.In summer 2012 we recorded our first album ,,Pagan thoughts Vol. 1‘‘.Musically we are focus most on the black metal scene,even we are playing a milder form of this style with a focus on pagan metal and old school.

As I mentioned in previous question…I would include us among the bands playing Pagan black metal with elements of Old school.

3.  Your musical lyrics cover a lot of Pagan topics, how would you describe your views in this area?

Yes,our lyrics are from a big part about nature and history of the celtic mythology area.We are also have a place in our work for a lyrics with resistence against the church and religious fanaticism in all its forms.On this themes we are build our lyrics and it will be the same in the future.We like history.

In the beginning, we are called Dark Pagan Thoughts, which marked a clear focus of the band. In 2011, we shortened the name to Dark Seal, which more reflects the dark side of our band. Pagan Thoughts in our logo still appears and shows our focus on paganism.

5.What are some of the best shows that the band has played so far and how would you describe your stage performance?

Here I would like to mention the actions that we played  which were organized by Hell Fast Attack Moravian underground fest and recently on Chaos tour 2013, where we played with a lot of quality domestic and foreign bands like Bessat (PL),Inferno(CZ),Pergamen(CZ) and Evil(SK).On live shows we always try to give the best possible performance wherever we play.We don’t use on stage warpainting or any other requisitions.

6. Do you have any touring plans for the future?

Due to the fact that we are still a new band on the scene, it is not easy to enforce. We are actively looking for further concerts.

7. Currently you are unsigned, are you looking for a label and if so what kind of label do you feel that would be a perfect fit for the music?

With music publishers in the Czech Republic it is problematic, there's no greater company, which has expressed an interest of the underground band. Small ones, for which the Czech bands issued their CD‘s, mostly don’t want to support other bands due to lack of finances.Of course we would like to have the support from some label, but so far  we don’t have any offer.We can arrange things ourselves, and with the release of the CD, which we did at our own expense, helped us David from the Murderous Production,which we thank him very much for it.

8.On a worldwide level how has the feedback been to your music by fans of black and pagan metal?

I think that fans from the Czech Republic and all over the world likes Pagan,Black metal and there is an interest in this music.This is evidenced by a number of domestic and foreign bands, which are move on this scene.However, attendance at concerts is declining, which is probably caused by the global financial crisis, and last but not least the reluctance of people to visit the concerts.The largest attendance at the concerts I recorded at the end of the 1980s and early 1990s.

9. Are there any other musical projects besides this band or is this a full time line up?

In my case, it's the only musical activity (not counting an active listening CD,haha ...), but our lead singer and guitarist Peter works in the local Death metal band Fatality and played in the band Amon (before joining Dark Seal).

10. What direction do you see your music heading into on future releases?

I assume that we will continue in the same style of music which the band gained, according to the feedback from fans it is moving in the right direction. We are working on new songs and lyrics which appears on our next recording. Mainly we want to play concerts as much as possible.

11. What are some bands or musical styles that have influenced your music and also what are you listening to nowadays?

I can say that our music affects all metal styles, and I think that you can hear it in our record. Each of us likes different artists, but mostly you can hear in our music Trash and elements of Black and Death Metal.We are also like bands like Behemoth, Immortal, Satyricon, Marduk, Demonaz, Unleashed, Enslaved, Borknagar (these last two have inspired me to use designated clean vocal lines into our creation) and many others from the Czech and worldwide scenes.For me, it's still a horde of classic bands such as Kreator, Sodom, Venom, etc.., which are caused the Old school sound to our music.

Due to the workload of the employment and the family, we don’t have too much free time. But probably the most popular activity outside playing and listening to music are walking through nature,drinking with friends or playing pc games :-D.

Thank you so much for your interest in our band and this interview. In this way, we salute and thanks the Murderous Production, Mortem zine and Hell Fast Attack and especially all our fans and friends who support us, because without them,it it definitely did not work.Metal Forever!!!!!!!!!

Posted by OccultBlackMetal at 1:15 PM