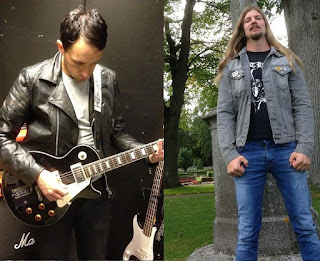 1. Can you give us an update on what is going on with the band these days?
A: Hello and thanks for doing this interview with us.  We are Aggressive Mutilator from Norrköping, Sweden. A two piece band started in 2012. Just right now we are planning to record 3 new songs plus a cover (the regulator by Bad Brains). If the recording goes well we will see if someone is interested in releasing this new opus, the title is gonna be "Monster decay”.

2. Your last demo came out in November, how would you describe the musical sound that is presented on the recording and also how does it differ from the stuff you have released in the past?

A: The earlier stuff are more standard primitive BM but on the latest one "Crude abomination” we have some strange elements added to the music. Some more melodic songs and not so primitive as before.


3. Since 2012 you have released a great amount of music, do you put a lot of time and effort into writing and creating music?

A: On an emotional level we put much effort in doing the songs but the songs are also very spontaneous sometimes. But always with a horror agenda and dark artwork.  I Always  has been a big fan of ghosts, goblins, dark places, horror tales, monsters and darkness.

4. What are some of the lyrical topics and subjects the band explores with the music?

A: About sickness, alienation, racism, hate, the society that goes in the wrong direction and WILL collapse.

5. What is the meaning and inspiration behind the name 'Aggressive Mutilator'?

A: Actually I don’t remember, Maybe Jack the ripper? The ripper case is interesting because it is also the story of his victims. They must not be forgotten or the dreadful conditions they lived under. It is sad the he opened up the eyes to a world you would not have heard of if he did not committed his crimes. He did not inspire us to take this band name, but in a retrospective view the band name can refer to someone like him. A sick and twisted person who can’t handle the modern society.

6.Currently there are only 2 members in the band are you planning on expanding the line up in the future or do you prefer to remain a duo?

A: It is very hard to find member that are into this kind of music. But we have some friend that will fit if there will be a live performance one day.

7. Over the years your music has been released on a decent amount of labels, can you tell us a little bit more about them?

A: They are Ljudkassett and Bifrost records in Sweden. Wm Psycho record in Poland, American line prod. in Mexico and Stygian shadows prod. in Poland. They have all done very fine pro releases. It is also fun to reach out to different parts of the world. Sweden is not the centre of the world. There are many other great bands out there too.

8. On a worldwide level how has the feedback been to your music by fans of underground metal and punk?

A: We received a lot of feedback from many places. That is really great and fun. It also shows that people are not interested in us as persons but interested in the music. Mostly metal fans have appreciated the music, not so many punk people have written us.

9. When can we expect some new music and also where do you see the band heading into musically during the future?

A: Don’t know. We start with the Bad brains cover and then we will start play Reggae ;). Seriously speaking, we don´t like when you mix too many element in the music. It can work sometimes. But most of the times it gets strange. The most important thing is of course great songs, and then the production or the music style doesn’t matter.

11. How would you describe your views on Satanism and Occultism?

A: We are not Satanist but like to flirt with the occult aesthetic.  We don’t see a problem having a satanic aura around the music. We can also have a Nazi aura even though we are not Nazis.

12. What are some of your non musical interests?

13. Before we wrap up this interview, do you have any final words or thoughts?

A: Thank for doing the interview. Please visit our bandcamp (www.aggresivemutilattorbandcamp.com) to see and listen to all our recordings, If you are in to under produced and ugly Black Metal this maybe is something for you. Feel free to email us if u have any questions. We have new output coming april 2016 "Crushed by tyranny" is the name of the recording. It will be a pro-tape on Iron county record in Hungary.  https://aggressivemutilator.bandcamp.com/album/crushed-by-tyranny
Posted by OccultBlackMetal at 9:31 PM