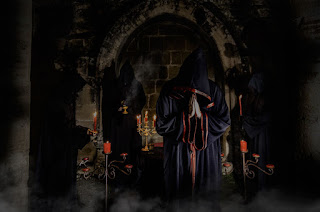 1.For those that have never heard of you before, can you tell us a little bit about the band?
1) The Temple has been built during the mid-2008 by Arkhon Sakrificer and Angelwhore so as to express our personal thoughts and perceptions embodied with music. This vision of ours has been enhanced following the last year’s additions of Apethantos and Nekrocurse to the Temple and it is fully captured on the debut album ‘’The 7th Awakening’’.

3.The band has been around since 2008 but waited until the end of 2015 and early 16, can you tell us a little bit more about the long wait?
3) The Temple has been struggling quite often with internal issues between its members because all previous members didn't share exactly the same vision as we did thus we had several line-up changes but we finally managed to find the right persons to embrace our unorthodox manifesto. Regarding the gap between the years of 2008-2015, however, the band was performing live and constantly worked on its own material.

4.Your lyrics go very deep into the Occult, can you tell us a little bit more about your interest in the dark arts?
4) We wouldn’t say that the lyrics are going that deep into the occult. Actually the lyrics come from esoteric thoughts following their incarnations on various subjects. In the personal perspective of each member we believe in spiritual freedom. The lyrics, actually, talk about a lot of topics. The core meaning is that you have to be free and do what you want to do without following blindly the distractions of any organizations such as religion.

5.What is the meaning and inspiration behind the name 'Temple Of Evil'?
5) The name was actually suggested by a close person of ours. He was present during the very beginning of the Temple and the name came after the listening of some demo-versions of the songs. The name describes our personal spiritual Temple in which we act as preachers of our vision.

6.What are some of the best shows that the band has played so far and also how would you describe your stage performance?
6) The best live performance so far was without a doubt last December as we performed our debut album in its entirety and we had finally managed to present the quintessence of this Temple live. In our live performances you get what you hear on the album; An atmospheric experience so that you can drown in the dark mist of our personal ritual.

7.Do you have any touring or show plans for the future?
7) Some shows have been already booked such as the Funeral Worship Festival and Power of the Night Festival which are both local fests and we have some other plans in mind but it’s too soon to mention any of these.

8.The album was released on 'Deathhammer Records', can you tell us a little bit more about this label?
8) Deathhammer Records was formed recently, in 2014, with the aim to release and promote unholy and unadulterated music. ‘The 7th Awakening’ was its 4th release [DHR004] and its first on CD as the previous were all on vinyl. It is a label to check out for sure and keep an eye on their upcoming releases. We have had a great collaboration with the label and we are very pleased to work with Deathhammer Records as we have received all the support that we needed in the process of releasing this album.

9.On a worldwide level how has the feedback been to yuor music by fans of black metal?
9) The feedback was really overwhelming and very encouraging. It is truly an honor to be able to witness that your music has that kind of impact on the listeners and we are certainly glad and appreciate the fact that the followers of this Temple embraced our vision.

10.The band is from Cyprus, are there any other bands that you would recommend from your home country?
10) Well, the Cyprus Metal scene is growing bigger and bigger over the years and we are glad to observe that there’s a constant fire in this scene. There a lot of bands to check out so if anyone is interested in this scene they have to discover those bands by themselves.

11.Where do you see the band heading into musically during the future?
11) Being realistic, we don’t know what the future will bring to us; we are focusing on the present to become better, write more music and continue our vision.

12.What are some of the bands or musical styles that have had an influence on your music?
12) The influences and inspiration come from anything we are able to experience. Regarding the musical influences it is quite obvious that we are highly influenced by the black metal scene in general.

13.Before we wrap up this interview, do you have any final words or thoughts?
13) We’d like to express our appreciation towards to… and certainly every individual who supported the Temple in any way.

Posted by OccultBlackMetal at 10:41 AM