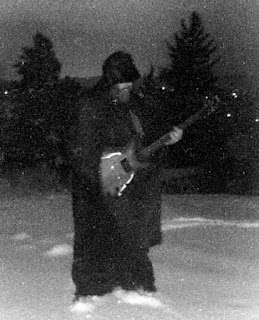 > 1.For those that have never heard of you before, can you tell us a little bit about the musical project?

My main project is Natanas. This project was birthed in 2013, a product of a need for creative release. I am the sole member, playing drums, guitar, bass, mandolin, violin, keyboards, and vocals.

>
> 2.How would you describe the musical sound that is presented on the recordings ?

Natanas gives a priority to feeling and atmosphere. Stylistically: black metal with a doom and depressive influence. Tempos are typically slow, vocals are harsh. Experimentation and incongruent moments exist as my mood dictates.

For over a decade I have worked in the oil field. Working two weeks straight, sixteen plus hour days. This left me with a pretty intense work ethic. In my spare time, I do not watch TV or films. I read books and make music. So, yes, I spend a large portion of effort and time writing, experimenting with, and recording music. It is a consuming passion for me, and something my family understands.

>
> 4.What are some of the lyrical topics and subjects you explore with your music?

With Natanas the feeling typically comes from the frustrations of life. The powerlessness of the average person. The futility of our existence. I have a pretty elaborate personal philosophy involving quantum entanglement and consciousness. This comes up a lot in my lyrics.

>
> 5.The musical project is located in  Wyoming, do you feel that living in this state that has a small population and not much going on for metal has given your music more of an isolated feeling?

Wyoming is the least populated state in the USA. I moved here back in 2005, leaving El Paso, Texas, where I grew up. El Paso has more people than the state of Wyoming. I feel much more at home here. That feeling of being surrounded by the open, the empty, the dry absolute cold. It pervades my music.

>
> 6.With this musical project you record everything by yourself, are you open to working with other musicians or do you prefer to remain a solo project?

Natanas will always remain a solo project. It wouldn't feel right to let anyone else in. No guest appearances, no one else may touch it.

>
> 7.So far you have been a part of many splits, can you tell us a little bit more about the bands and projects that you have shared splits with?

Unhappy out of Istanbul, Turkey is a dsbm band that I enjoy immensely, a favorite of mine. I feel honored to have shared a release with him.
Necroennui out of Phoenix, is an ambient project of Liam Weir. The soundscapes he produces are like liquid emotion. They invoke a feeling, a place. This split spawned a side project: Telerumination.
Music Distroyer out of Colorado (a state I lived in twenty years ago, and have fond memories of), play an old school brand of extreme metal. I am a fan of their sound and was very pleased to have a split release with another band in the Rocky Mountain area.
Ulfrinn out of West Virginia is a black metal project that makes you feel the woods, and the crumbling infrastructure. This release spawned an ongoing friendship.
Bukavac out of North Dakota (a state I have spent quite a bit of time in) has a technical approach, no matter how much he'll deny it. You cannot help but raise the horns when Bukavac is on the stereo. Great guy.
Vore out of Mexico is a band with intimidating talent, and a friend. I am very happy to have had the opportunity to have a release an album with this act.
Nekroverse out of Finland play a traditional brand of black metal. Filthy and pestilent. When the chance came to do a split, I jumped at it.
Atel out of California play a depressive atmospheric blend of black metal. Slithering vocals and fast riffs. I have enjoyed the sound since my first listen. I am very pleased that a split happened.

>
> 8.What is going on with your other musical projects these days?

Telerumination is on a hiatus for personal reasons. Just prior to this work had started on a second album. When this project returns it will do so stronger. Look for it!

Uls De Tol has had two releases this year, so far. It is depressive, mainly instrumental rock music. Thematically inspired by Aleister Crowley, and meditative in quality. It is another solo venture. An outlet for a side of myself that doesn't quite fit into the scope of Natanas.

>
> 9.On a worldwide level how has the feedback been to your music by fans of black and doom metal?

By and large positive. I have spoken to people all over the planet who enjoy what I am doing. This is nice to hear, yet at the same time Natanas is a personal expression and reflects what I am feeling. The prospect of what other people may think of it doesn't impact the creation of it. This is not meant as a douchebag kvlt statement. It is my escape. It is my time in aural form.

>
> 10.Where do you see yourself heading into as a musician in the future?

Continuing to improve and expand the techniques and instruments in my retinue. I think that is all any musician can hope for.

>
> 11.What are some of the bands or musical styles that have had an influence on your music and also what are you listening to nowadays?

Music is religion to me, the only one I have ever fully given myself to. Queen, AC/DC, Rush, Black Sabbath, Kansas, Led Zeppelin - these were my childhood, to this day bands I adore. GG Allin, DRI, King Diamond, Metallica, GBH, Slayer, Cannibal Corpse, the early Chilli Peppers albums, the Smiths formed a larger world during my early teen years. Striborg, Burzum, Xasthur, Leviathan taught me of the possibility of creating the output of an entire band by one man. This was revelation.

Lately, I have been listening to a playlist of favorites from Ulfrinn, Vore, Striborg, Idaaliur, Sleep, Darkthrone, Cannibal Corpse, Gorgoroth, Metallica, Merciful Fate, Neurosis, Syphilic, Flachenbrand, the list goes on...

>
> 12.How would you describe your views on Satanism and Occultism?

I am an atheist who identifies with Laveyan Satanism as a philosophy. It most directly lines up with my personal views. I have read widely sources from many occult traditions. I am a fan of the works of Crowley, yet am not an adherent of his approach. I was formerly a 32 degree regular Freemason, yet decided to leave their organization due to the requirement of belief in a deity - something I feel incapable of doing.

Overall occult systems are, in my mind, methods of approaching the unknown. Ways of reconciling the universe around us. I am for anything that works for each individual. There has never been another point in history where the availability of information has been this great. Nothing is hidden, it is all out there...

>
> 13.Before we wrap up this interview, do you have any final words or thoughts?

Until the day I expire, I see myself making music. If it is something you enjoy then I am pleased that my labor has found a favorable ear. Thank you for the opportunity to answer these tailored questions.

Posted by OccultBlackMetal at 10:15 AM