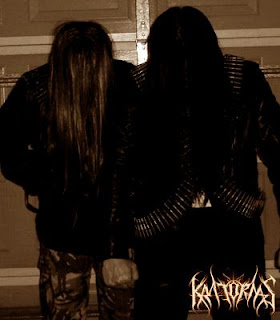 1.Can you give us an update on what has been going on with the band in the past 7 years since the last interview?

Nothing happened after that except putting an end to Kratornas last 2010. I've been busy processing my papers at that time so cutting it all is the only logical thing to do.

2.In December you had released a new album, how would you describe the musical sound that is presented on the recording and also how does it differ from your past material?

All previous releases was recorded with minimal instrument and zero knowledge. That's all I have right there. In this 3rd album, although I only bought what I need, I am still surrounded by unlimited resources. In terms of equipment, the difference is night and day. Aside from that, everything remains the same.

3.I have read in another interview that you refer to your music as 'barbaric death metal', can you tell us a little bit more about this term?

Perhaps a very old interview, but yes, because Death Metal to me means Deicide, Immolation, etc and not those who jumps around. Death Metal, in general, is very important in everything that we do so any 'word' prior to that is just an added literal description.

4.What are some of the things you have explored lyrically with the newer music?

Same thing as the first two albums - I haven't strayed. It's always about what's going on around. They're not written straightforward but twisted by metaphors and mostly inspired by Endtime Prophecies.

5.For years this band was a solo project and now you have a drummer, what was the decision behind adding in another member?

I've already spent a decade doing it all alone, not this time. As you age, it seems that there are not enough time on everything you do. Getting a real drummer is a leap in everything I've done in the past so this is it. I don't even think things will sound like this if I'm alone doing all things again.

6.Between 2012 and 2016 there was no new material, can you tell us a little bit more about what was going on during that time frame?

I've been really busy traveling and living from country to country. This is not 'work related' so all expenses were on me. Wasn't easy driving new routes in each of those, etc, but that's the reward of it. After getting used to it, everything was of great experience that will not happen again.

7.Between 2009 and 2016 are there any newer bands that you have discovered or do you feel that extreme metal has lost a lot of power over the years?

To be honest, I don't. When I'm about to left the Philippines, I ripped every album of bands that really matter to me and stored it on a portable drive. As technology sails, several phones went to copy those files and those were the only bands that I always listen to. I started buying music again after I have settled here in Canada in 2014. Of course, I have bought new bands during this time but it seems that every new band I've heard sounded very much alike, I don't know. That's just an opinion 'though...

8.The new album was released on 'Grathila Records', can you tell us a little bit more about this label?

It's an own label taking care of Kratornas releases. There are other people involved so technically, it's not mine per se but I'm the one taking care of everything. The other guys just give extra funds, do couple mailings if needed and that's it.

9,On a worldwide level how has the feedback been to the newer music by fans of underground metal?

There are positive reviews around. There are good, there are those who really like it, and there are those who find it too chaotic and left it all hanging in there. If one is expecting mid-tempo stuff to have nice feelings then this is not it. These are new people receiving the promos. I haven't done so much promotion myself. Time runs short doing that.

10.Where do you see 'Kratornas', in the future?

There is no future. Kratornas was long buried in 2010 so it is what it is. It continues to exist only because of my burning enthusiasm on Occultism, Unexplained Mysteries, and Metal. If I'm not writing something about it then I'm 'living it', so to speak. Since you already ask, I want to connect it to this: recently I got several emails asking if I can play live now since Guzzarin is here. I appreciate all the messages but the answer is no.

Thank you for having me here again.