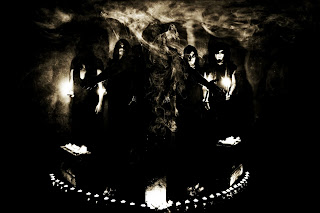 Apsychos: After the recordings we started working on the promotional and organizational parts, I worked on the graphics, we looked for a label and promotional gigs. We played only once in September, after that we shot our first video and we recorded the split album with our friends Catechon, Ad Noctem Funeriis and Athanor.

2.In 2017 you have a new album coming out, how would you describe the musical sound that is presented on the recording and also how does it differ from the stuff you have released in the past?

Apsychos: For me, Ars Goetia is the next step from Pestilentia, or rather the continue of that modern sound and, for some aspects, more death metal, that defined the unique sound of that album. Our last work is violent, obscure, epic and introspective, it's a product made by some different styles of the current line up. Therefore it has a personal touch for all of us.

3.The lyrics on the new album are based upon the 'Goetia', can you tell us a little bit more about your interest in the dark arts?

Xes: Since I was young, I was always fascinated in the occult world, living in a very christian family, I grew up with a strong religious component always present, but as the years passed, my interest was increasingly turned to the discovery of the antithesis of all that was christianity. I also had some "strange" experience during the school ages, who has made me closer to occultism and esotericism.

4.What is the meaning and inspiration behind the name 'Infernal Angels'?

Xes: The name it was inspired from Milton and his “Paradise Lost” In fact in the first two demos we had treated more closely his poem. Lucifer, the fallen angel is represented as the object of admiration of the story, to imitate and celebrate like a true hero. He fight hard  to overcome his own doubts and his own weaknesses, and completes his goal, that is corrupt the mankind. Satan is considered the most interesting and compelling characters of Milton's work, mainly because of his complexity and his cunning.

Xes: I can not tell what was our best show, I always hope they are better any time. However, I have great memories of each one of them. Each show has helped us to grow and, hopefully, to improve. I hope our concert could be a kind of ritual and extracorporeal journey for those who listen to us.

6.Do you have any touring or show plans for the new album?

Apsychos: Actually we have only a few shows confirmed around Italy, with the release party programmed for January 21. We want to spread our new creation around the world, the idea of a tour is amazing, but first we have to value some things.

7.On the new album you had some guests, can you tell us who they are and their contributions to the recording?

Xes: I know Mancan, Lorenzo and Snarl from over ten years. I respect them a lot as musicians and we grew a sincere friendship, that is a very difficult thing in this environment of envy and jealousy. In 2017 will be fifteen years since the birth of Infernal Angels and I wanted to include them because they have seen grow the band over the years. Mancan was perfect, with its warm, deep voice for the final part of Asmoday. Lorenzo and Snarl have a much more harsh scream than my vocal timbre so their performances are in a perfect contrasts with my voice. Each one of them have given something plus to the album and I am very grateful.

Apsychos: We know we have fans in Europe, I met people who follow Infernal Angels from the beginning, I also follow them from Shining Evil Light. But I don't know our fame overseas, as I don't  know their feedback to us.

Apsychos: The same things that we're doing with Infernal Angels, we go on trying to produce and to promote our music. We often work simultaneously, in 2016 we focused much on our side/main projects, for Infernal Angels, Necandi Homines (we recorded our first full length in November), Haegen (they recorded their second full length) and Venders with electronic music, it has been a very productive year.

Apsychos: We don't know what we awaits in the future. Right now we aim to spread as much as possible our music and to take every single crumb of satisfaction that we gain and, we hope that this last as long as possible.

Apsychos: We don't have styles or bands in particular that influence us on the composition of the album. When I, Gradig, Venders and then subsequently Hagen and Nekroshadow entered the band, Infernal Angels were already far along in their evolutionary path, we brought many songs of Pestilentia on stage, we got used to that sound, we made it ours and we brought forward. We belong to completely different background ranging from heavy metal to black metal, folk to post-rock and experimental, individually we have our own recognizable musical and compositional personality, Ars Goetia is a great mixture of styles that are well blended together.

Apsychos: We thank you for granted us this space. Stay tuned. 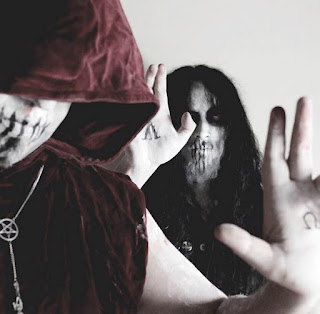 Posted by OccultBlackMetal at 10:45 AM