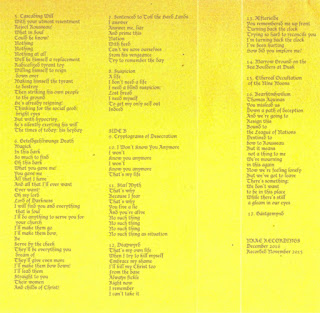 1.For those that have never heard of you before, can you tell us a little bit about the musical project?
Cardinal was started in 2015 as a project that combined ideas I had been working with for many years into one sound

2.How would you describe the musical sound that is presented on the recording?
I may not say that it is musical. It can be musical, but melodic and acoustic elements are just as present as non-musical sound. It is all the same to me

3.What are some of the lyrical topics and subjects you explore with your music?
You may read them as you wish. When writing them I held anti-Christian and anti-Communist sentiments. These two totalizing forces subdue pagan and primitive origins of Ireland, Scotland, and all other regions of the world. There is great sorrow in what is forgotten in the shadow of Lutheran, Calvinist, Catholic thought, etc., and Communist/Hegelian power. Both have affected long wars against practices of the occult through their corrupt moralism, which continues today. My lyrics are an expression of this sorrow.

4.What is the meaning and inspiration behind the name 'Cardinal'?
It is both a wonder of the natural world, and a bitter reminder of the unnatural syntheses that Religion yields.

5.With this project you record everything by yourself, are you open to working with other musicians or do you prefer to remain solo?
It is entirely solitary and removed

6.The album was released on 'NRAE  RECORDINGS", can you tell us a little bit more about this label?
NRAE is run by a close friend who releases sound and music in various genres. It is primarily experimental and non-music from what I can tell but I chose to release it with his label to keep its reach limited while still showing my music to some who may find something in it. I may approach more traditional backwoods black metal labels in the future if there is interest

7.On a worldwide level how has the feedback been to your music by fans of black metal and noise?
I have tried to keep Cardinal very secretive until the last month. I live in a town and area which is controlled by communists so I cannot present it locally. The few I have shown Cardinal in North America have responded favorably although many fans of the traditional black metal sound and and traditional power electronics may be put off by my lack of orthodoxy and familiar structure which is fine

8.Are you also involved with any other bands or musical projects?
Cardinal is my only musical endeavor although I have various experimental sound outlets

9.Where do you see yourself heading into as a musician in the future?
A world of chaos and excruciation is necessary so that I can continue to destroy and rebuild everything I create

10.What are some of the bands or musical styles that have had an influence on your music and also what are you listening to nowadays?
I am drawn by primitive/mystic sounds. The LLN and Finnish underground appeal to me. Recently I have listened to recordings of Organum, Brenoritvrezorkre, Tam Quam Tabula Rasa, Metgumbnerbone, and Folkways' "Folk Music of Yugoslavia" compilation for instance.

11.Does Occultism play any role in your music?
Yes. I take interest in Druidism and Gaelic occultism and their use of alchemy and magic, which existed prior to Christian and Communist world domination

12.What are some of your non musical interests?
I enjoy reading history and philosophy, especially the writings of my enemies' plans to destroy my family and our Gaelic cultural history. I am intoxicated by origins or lack thereof

13.Before we wrap up this interview, do you have any final words or thoughts?
Resist totalitarianism in all its forms!

https://nrae.bandcamp.com/
Posted by OccultBlackMetal at 4:09 PM